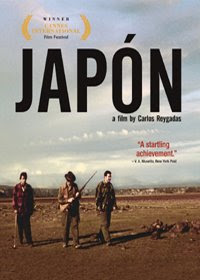 Unsettling but extremely accomplished debut effort from a young Mexican director who first came to my attention with his controversial Battle in Heaven (Batalla en el cielo) a few years back. As with that film, Japón is an enigmatic, occasionally awkwardly-told tale of great visceral power nonetheless due to the primacy it places on sounds and images as narrative devices. "Tarkovsky Lite" is a tag no sane director should want to be saddled with, but Reygadas practically asks for it with this brooding meditation about a guy who moves to a faraway village to kill himself only to eventually discover that death might not be the only solution to all his problems. Probably too existential and/or violent for the Indiana Jones fans in your immediate family. (http://www.tartanvideousa.com/)
Publicadas por Richard a la/s 22:34