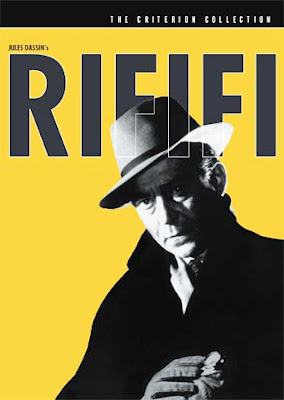 Based on an Auguste le Breton novel so laced with criminal slang that blacklisted American director Jules Dassin had to call in his French business agent to translate the work for him before deciding whether or not he wanted to adapt it for the screen, this 1955 Parisian noir is one of the canonical works in the failed heist and/or robbery-gone-horribly-wrong subgenres. The famous 33-minute safecracking scene, devoid of all dialogue or any musical accompaniment whatsoever, is a testament to Dassin's directorial audacity and cinematic craftsmanship; other aspects of the production, from the excellent ensemble acting to the criminals vs. criminals subplot to all those handsome City of Light location shots filmed almost entirely at night or on overcast days, are similarly virtuosic without being showy in the least. How much Rififi's closing moments surpass or succumb to genre expectations depends on whether you regard the ending as a redemption story or a morality tale, but there's no denying the aesthetic punch packed into all the frames that precede it. A knockout. (http://www.criterion.com/)
Publicadas por Richard a la/s 23:26