Cristina Mendoza: "Quatre Gats and the Origins of Picasso's Career" 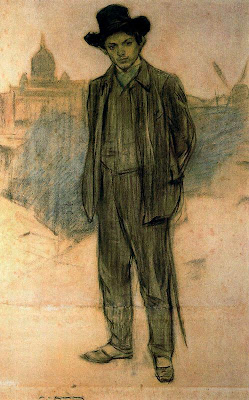 I can't believe it's already been over three months since our last BCN and Modernity post, but Cristina Mendoza's catalog entry on Picasso and the Quatre Gats provides a perfect excuse to revisit the theme. While Mendoza does a nice job explaining the young artist's links to the tavern during the very brief time he was associated with it, Ramon Casas' 1900 portrait of Picasso in Paris, foregrounded between the Sacré-Coeur and the Moulin de la Galette in the distance above, and Picasso's own 1900 autoretrato below (note the discreet "yo" near the top left) rank among her chapter's happiest visual offerings on display. Note: The Van Gogh Museum in Amsterdam recently hosted an exhibit called Barcelona 1900, which those wanting more information on this key year in Catalan arts and history can read about here.