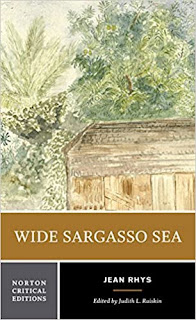 Wide Sargasso Sea, long ignored by me as an exemplar of what I wrongly assumed to be English fuddy duddy writing, somehow managed to sneak up on me.  What a fucked-up novel!  Justly celebrated for being something of an intricate prequel to and swipe at aspects of Charlotte Brontë's Jane Eyre, the Dominica-born Rhys' back story of the so-called madwoman in the attic--largely set in Jamaica in the 1830s and 1840s before removing to Brontë's Thornfield Hall for its devastating intertextual conclusion--is a lush, messy, thorny affair in which the rewards turn out to be a lot more sui generis than I would have gathered beforehand.  Loved, for example, Rhys' naturalist's eye for detail in the representation of the protagonist Antoinette's childhood home; a mere three pages into the work, a dog has been shot in a murder/suicide, a horse has been poisoned and the childhood garden that has gone "wild" gets remembered like this: "The paths were overgrown and a smell of dead flowers mixed with the fresh living smell.  Underneath the tree ferns, tall as forest tree ferns, the light was green.  Orchids flourished out of reach or for some reason not to be touched.  One was snaky looking, another like an octopus with long thin brown tentacles bare of leaves hanging from a twisted root.  Twice a year the octopus orchid flowered--then not an inch of tentacle showed.  It was a bell-shaped mass of white, mauve, deep purples, wonderful to see.  The scent was very sweet and strong.  I never went near it" (11).  So much for a simpleminded opposition pitting Eden against England!  Similarly, I also appreciated the three-dimensional depiction of Antoinette's interior life as an outsider.  If it's easy to sympathize with the character when blacks on the island jeer her and her family for being poor "white cockroaches" or when the Rochester character--never mentioned by last name in the text--baldly confesses that "I did not love her" after marrying her, Rhys doesn't exactly elevate her to sainthood with the revelation that she called a childhood acquaintance a "cheating nigger" in a moment of weakness (14) and even actively subverts the notion about what kind of a catch the damaged Antoinette might have made as a marriage prospect with the details about her childhood fears of finding "a dead man's dried hand, white chicken feathers, a cock with its throat cut, dying slowly, slowly" (18).  Whatever, splendid, unpredictable stuff and in its evocation of female trauma, more of a piece with something like Marguerite Duras' Le Ravissement de Lol V. Stein than the governess novel with which it's usually associated. 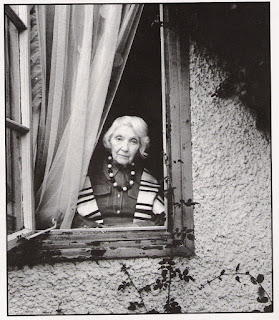