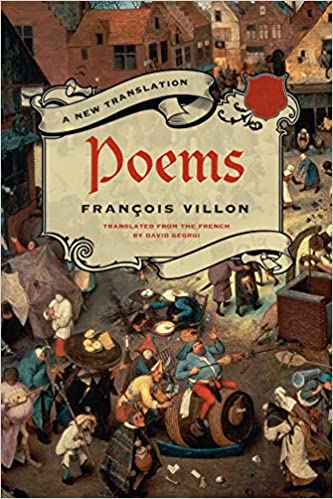 The Testament [Le Testament Villon] (Northwestern University Press, 2013)
by François Villon [translated by David Georgi]
France, c. 1461
How do I love The Testament?  Let me count the ways.  One of the acrostics, FRANCOYS and MARTHE, appears in verses 942-955 in the section of the poem that David Georgi has translated under the rubric "Ballade from Villon to His Sweetheart."  ("False beauty, your cost is too high by far!" ["Faulse beauté, qui tant me couste chier"] Villon coos.)  Another, VJLLON, appears in verses 1621-1626 within "The Ballade of Fat Margot" where the poet/pimp claims he and his hooker girlfriend are a good match: "like unto like: bad rat, bad cat" ["L'un vault l'autre, c'est a mau rat mau chat"].  In addition to the self-referential fun and games, I was also smitten with the self-propulsive flow of Villon's 2,023-verse kitchen sink of song.  Early on, after raging against poverty and old age, the poet turns his sights on the ubi sunt theme with feeling in the marvelous "Ballade of the Ladies of Times Long Past."  "Mais ou sont les neiges d'anten?" ["And where is the snow that fell last year?"] he repeatedly asks at the end of each octet and quatrain (cf. verses 336, 344, 352 & 356).  A mere "Another ballade" later, Villon uses Charlemagne and other power brokers from the past to remind us that "No man alive can combat death,/or win a court's protection from it" ["Il n'est qui contre mort resiste/Ne qui trouve provisïon"] (verses 375-376).  This, in turn, is followed by an exercise in style using a version of French already antiquated in Villon's time as if to suggest that even words fade away.  Georgi calls the language here "a caricature of the French of an earlier period," full of archaisms, "that an educated medieval reader might have recognized from old chansons de geste, such as The Song of Roland, or from the quest-romances already two hundred years old by Villon's time" (notes, p. 237).  Of course, the hijinx aren't always so highbrow.  In "Ballade for a Lush," Villon pokes fun at Lot for having been "very forward with your daughters" ["De voz filles si vous fist approucher"] under the influence of drink (verse 1241) and in a later stanza he refers to one Marïon la Peautarde, whom Georgi casts as Marion Blisterskin (verse 1781) in honor of her "joke name"--in the translator's reading, Marïon la Peautarde = "Marion, la peau t'arde" or "Marion, your skin burns you" suggestive of "the symptoms of a venereal disease" (p. 255, notes).  Never a dull moment avec Villon, and I haven't even gotten around to any of the Testament's actual bequests, the vile, proto-Rabelaisian "Ballade of Meddlesome Tongues," the geographical puns opposing Montmartre and Mount Valerien--"In Villon's time," Georgi explains, "the abbey of Montmartre was in shambles and the nuns sold wine to get by.  They will be able to sell something else too, Villon suggests" (verses 1551-1558; notes, p. 252) via the double whammy of playing off the Montmartre nuns' licentious reputation and the sound effect goof of Valerien sounding like ne "valent rien" or "they're worth nothing"--the hangman's jokes and the debauched like, or the final verses of the poem where the "poor Villon" ["povre Villon"] showily signs off on his testament with a succession of rhymes ending in "-illon" or "-ullon" in alternating lines (cf. verses 1996-2023 in the original for the full effect).  A tour de force worthy of all the hype.
Source
David Georgi's 2013 bilingual edition of Villon's Poems includes The Testament (Evanston: Northwestern University Press, 2013, 27-163) in Villon's Old French and Georgi's modern English in a facing translation.
Publicadas por Richard a la/s 23:58