Ennui with a Backbeat 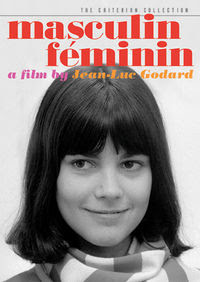 I finally got around to watching this celebrated study of mid-'60s Parisian youth culture and was so blown away that I watched it twice in the last couple of weeks to see what I might have missed. Although Chantal Goya's lovely pop songs might make you think things are all fun and games here, they serve as an excellent foil to what is essentially a dark and pessimistic take on the banalities of modern consumerism. Thinking about Godard's work 4o+ years after it was made, I'd have to say that this is one of the most "punk rock" directing efforts I've ever seen. Most scenes mix a certain anthropological distance with an in-your-face interrogatory style, and the intertitles and allusions to random violence sprinkled throughout also sport a rather aggressive spraypaint belligerence. Confrontational? Yeah. However, the artistry of the film lies in scenes like the one titled "Dialogue avec un produit de consommation" (Dialogue with a Consumer Product) where a 19-year old beauty queen--wholesome, fetching, more or less totally apathetic--practically gets crucified with a series of uncomfortable questions about politics and sex. If there's no pleasure in watching her get her comeuppance, maybe it's because moments this brutal and seemingly spontaneous reveal characters less "cinematic" than we're used to dealing with on the screen. Superb. (http://www.criterion.com/)
Publicadas por Richard a la/s 18:26