I Have Nothing but Contempt for You 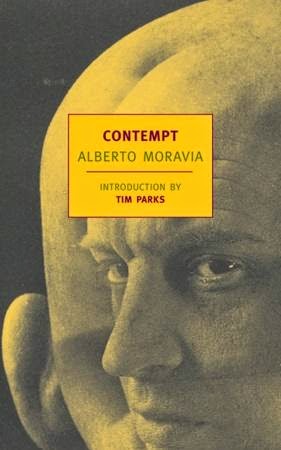 I'll say it one more time--"out loud" as it were: I HAVE NOTHING BUT CONTEMPT FOR YOU, YOU FUCKING BLOGGERS!!!  No new reviews.  No histrionic wringing of hands about the lackluster translation rates of foreign language lit making it into English.  Not even one of those alliterative memes that some of y'all super earnest types are so dang fond of.  Instead, all I have--all and nothing but, in fact--is contempt (a/k/a Contempt) in the form of a group read of the 1954 Alberto Moravia novel  [original title: Il disprezzo] being held over Memorial Day weekend, May 23rd thru May 25th, in conjunction with the lovely Frances of the legendary Nonsuch Book and the growing number of other non-contemptible types listed below.  Ignore that horrible NYRB Classics cover if you can (presumably generic clip art lifted from some high school yearbook editor's forgotten bottom desk drawer) and concentrate instead on the potential antisocial pleasures to be had in reading a slim 250-page novel of which no less an unassailable authority than the blurb-writer for the back cover of the NYRB edition has enthusiastically opined: "Molteni is one of the great appalling characters of twentieth century fiction."  So are you an innie or an outie?

Out
Everybody Else
Publicadas por Richard a la/s 16:32 38 comentarios: