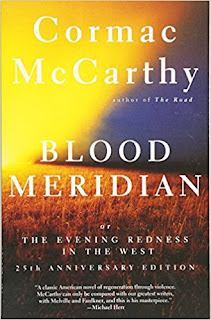 Blood Meridian or The Evening Redness in the West (Vintage International, 1992)
by Cormac McCarthy
USA, 1985

More than any other contempo author/title I can think of, Cormac McCarthy in general and maybe Blood Meridian in particular--I can't be bothered to track down the details of the original dispute--seem to've divided my small circle of trusted reader friends into something resembling actively warring pugilistic factions: those who love the guy and those who can't abide him.  After finally subjecting myself to the over the top/no holds barred/orgiastic violence of his signature work, I can finally relate to this entirely understandable state of affairs.  Nominally the tale of a descent into Mexico by American scalp hunters--an odyssey replete with a multiplicity of beheadings, scalpings and more mundane atrocities, all recounted with an indefatigably gory precision--and by extension a sobering meditation upon the nature of man's perennial infatuation with bloodlust and warfare, Blood Meridian's in your face storytelling excesses as pertains to its close embrace of violence still struck me as something of a major aesthetic flaw until I began to think about the novel more as an Inferno-like journey through and reflection upon the so-called opening of the 19th century American west and less as merely an ultraviolent example of viscera(l) realism or anything like that.  I should note that I don't claim that that same strategy should or will work for you.  As it happens, though, I fell under the sway of McCarthy's artistry early on.  In a work in which Melville might be said to have replaced Virgil as the official tour guide of hell, I loved the sense of dread and felt right at home among the various other psychic connections linking Blood Meridian to both Moby-Dick and parts of 2666.  More tangibly, I loved the snap, crackle and pop of McCarthy's prose.  An audio example: "The terrain was thick with cholla and clumps of it clung to the horses with spikes that would drive through a bootsole to the bones within and a wind came up through the hills and all night it sang with a wild viper sound through that countless reach of spines" (253-254).  A visual example: "This ferry was taken over by the Yumas and operated for them by a man named Callaghan, but within days it was burned and Callaghan's body floated anonymously downriver, a vulture standing between the shoulderblades in clerical black, silent rider to the sea" (273-274).  These two style samples will have to suffice for now to give you an idea of what McCarthy's jab is like, but anybody interested in observing his punching power should continue tuning into the beating below. 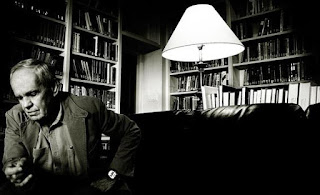 On a rise at the western edge of the playa they passed a crude wooden cross where Maricopas had crucified an Apache.  The mummied corpse hung from the crosstree with its mouth gaped in a raw hole, a thing of leather and bone scoured by the pumice winds off the lake and the pale tree of the ribs showing through the scraps of hide that hung from the breast.  They rode on.  The horses trudged sullenly the alien ground and the round earth rolled beneath them silently milling the greater void wherein they were contained.  In the neuter austerity of that terrain all phenomena were bequeathed a strange equality and no one thing nor spider nor stone nor blade of grass could put forth claim to precedence.  The very clarity of these articles belied their familiarity, for the eye predicates the whole on some feature or part and here was nothing more luminous than another and nothing more enshadowed and in the optical democracy of such landscapes all preference is made whimsical and a man and a rock become endowed with unguessed kinships.
They grew gaunted and lank under the white suns of those days and their hollow burnedout eyes were like those of noctambulants surprised by day.  Crouched under their hats they seemed fugitives on some grander scale, like beings for whom the sun hungered.  Even the judge grew silent and speculative.  He'd spoke of purging oneself of those things that lay claim to a man but that body receiving his remarks counted themselves well done with any claims at all.  They drove on and the wind drove the fine gray dust before them and they rode an army of graybeards, gray men, gray horses.  The mountains to the north lay sunwise in corrugated folds and the days were cool and the nights were cold and they sat about the fire each in his round of darkness in that round of dark while the idiot watched from his cage at the edge of the light.  The judge cracked with the back of an axe the shinbone on an antelope and the hot marrow dripped smoking on the stones.  They watched him.  The subject was war.
The good book says that he that lives by the sword shall perish by the sword, said the black.
The judge smiled, his face shining with grease.  What right man would have it any other way? he said.
The good book does indeed count war an evil, said Irving.  Yet there's many a bloody tale of war inside it.
It makes no difference what men think of war, said the judge.  War endures.  As well ask men what they think of stone.  War was always here.  Before man was, war waited for him.  The ultimate trade awaiting its ultimate practitioner.  That is the way it was and will be.  That way and not some other way.
(Blood Meridian, 258-259)
Publicadas por Richard a la/s 16:11 15 comentarios: