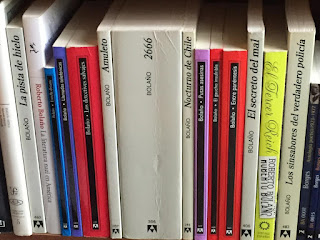 Muchísimas gracias to Stu of Winstonsdad's Blog, our genial co-host for Spanish Lit Month 2016 and of course the founder of the event way back in 2012, as well as to everybody else who read and wrote along with us this summer.  Judging by the ungodly amount of time it took to collate all the July and August links below (note: a few links falling outside of the official event calendar but included here anyway are marked with a pedantic and telltale *), SLM 2016 was an absolutely smashing success in terms of all the Spanish & Basque & Catalan & Galician language literature enjoyed.  Please read on to the end of the post for a chance to see what SLM 2016 participants Amateur Reader (Tom) and Rise have to say about some of their Spanish-language favorites--and until it's time for the next Spanish Lit Month to rock/roll around, hope you enjoy all these freakin' links!

Amateur Reader (Tom), Wuthering Expectations
Oh, deep wisdom of the cipher - some Antonio Machado
Sweet taste of being alive - some clearer Antonio Machado
the stupidity of people agreeing to get bored together for a day - general impressions of La Regenta
(on La Regenta by Leopoldo Alas)
as if to make amends, and to deceive himself - La Regenta is a religious novel
seemly abbreviations and a gongoresque style - some bits of La Regenta
'I require gossip worthy of me' - some last La Regenta notes, symbolic in some mysterious way, voluptuous even

Bellezza, Dolce Bellezza
The Angel's Game by Carlos Ruiz Zafón
How to Travel Without Seeing: Dispatches from the New Latin America, the latest novel by Andrés Neuman

Emma, Book Around the Corner
Exemplary Crimes by Max Aub
Tango for a Torturer by Daniel Chavarría

JacquiWine, JacquiWine's Journal
The Man of Feeling by Javier Marías
Pazo de Villarei Albariño, 2015 - a wine for #SpanishLitMonth
Affections by Rodrigo Hasbún
The House of Ulloa by Emilia Pardo Bazán

Julianne Pachico, Never Stop Reading
Two Story Collections
(on Juan Gabriel Vásquez's Lovers on All Saints' Day and one other title)
Rereading One Hundred Years of Solitude
Feast of the Innocents by Evelio Rosero

Mandy, peakreads
I'll Sell You a Dog by Juan Pablo Villalobos*
a plague on both your houses: The Transmigration of Bodies by Yuri Herrera translated by Lisa Dillman published by And Other Stories

Pat, South of Paris Books
Kiss of the Spider Woman by Manuel Puig
The Night by Rodrigo Blanco Calderón
None So Blind by J.Á. González Sainz
Une femme suspendue by Lorenzo Silva

Séamus, Vapour Trails
Tres by Roberto Bolaño
The Literary Conference & An Episode in the Life of a Landscape Painter by César Aira

Stu, Winstonsdad's Blog
The Sky Over Lima by Juan Gómez Bárcena
One Million Cows by Manuel Rivas
The Lone Man by Bernardo Atxaga
Affections by Rodrigo Hasbún
The Body Where I Was Born by Guadalupe Nettel
The Winterlings by Cristina Sánchez-Andrade
An Episode in the Life of a Landscape Painter by César Aira
On the Edge by Rafael Chirbes
Wakolda by Lucía Puenzo

Tony, Tony's Reading List
Umami by Laia Jufresa
God Is Round by Juan Villoro
Vicious by Xurxo Borrazás
The Body Where I Was Born by Guadalupe Nettel
The Transmigration of Bodies by Yuri Herrera
Death in Spring by Mercè Rodoreda
Como agua para chocolate (Like Water for Chocolate) by Laura Esquivel
Affections by Rodrigo Hasbún*

Bonus: Meet the Readers
As sometimes happens around here, I had an OK idea last year that I failed to execute on in either Spanish Lit Month 2015 or Spanish Lit Month 2016.  That being said, I'm rather sure you'll enjoy these Spanish Lit Month "introductions" to Amateur Reader (Tom) of Wuthering Expectations and Rise of in lieu of a field guide thanks to those two and no thanks at all to me.  My questions/comments are in italics; their answers aren't.  Thanks, of course, to Tom and Rise for humoring me even as their responses marinated for well over a year!

Amateur Reader (Tom), Wuthering Expectations
1) What's the first Spanish-language work that you remember really grabbing your attention as a a reader?
Don Quixote (1605/1615), which I read in high school as a comic adventure story and soon after in college as the first postmodern novel.  Subsequent reading has shown that it is many other things as well.
2) What are three of your all-time favorite Spanish-language works?
Don Quixote; Ficciones (1945); One Hundred Years of Solitude (1967).  A logical chain of books.
3) What's a criminally overlooked Spanish-language author or work that you would like to recommend to other readers?
The entire body of medieval and early modern Spanish literature aside from Don Quixote is overlooked by English-language readers.  It is so rich, and so readable.  For a single work, I will pick Life Is a Dream (1635) by Pedro Calderón de la Barca, which is as good as Shakespeare.
Please select one favorite post on a Spanish-language author or topic from the Wuthering Expectations archives.
On Roberto Arlt and restless writers.
One of my favorite posts from Tom: Bolaño, Aira, and the Argentinean Literature of Doom.

Rise, in lieu of a field guide
1)  What's the first Spanish-language work that you remember really grabbing your attention as a a reader?
The Savage Detectives freed me from a lot of things and inspired me to start writing about books.
2) What are three of your all-time favorite Spanish-language works?
The Oleza novels (Our Father San Daniel and The Leprous Bishop) by Gabriel Miró, trans. Marlon James Sales, is at surface a story of clerics in a backward village.  But its secrets and undercurrents describe the complex negotiations and painful compromises in this secular world.
Labyrinths by Jorge Luis Borges (eds. Donald A. Yates and James E. Irby) is a surfeit of ideas, constructed and reconstructed, in a loopy adventure of reflecting mirrors and mazes and doubles.
Dark Back of Time, among the dense, atmospheric novels by Javier Marías, is an unstructured, memory-soaked investigation into the art of metafiction.
3) What's a criminally overlooked Spanish-language author or work that you would like to recommend to other readers?
El Folk-Lore Filipino (1889) by Isabelo de los Reyes is hard to classify in terms of genre.  It may be a "folklore novel" and perhaps an early instance of the encyclopedia novel.  It is revisionary and revolutionary in intent, a compendium of local fables, customs, and traditions set off against Spanish colonialism.  More than a sociological and cultural curiosity, it is a compendium of worldview.  The first of two volumes of this classic work in Spanish is translated by Salud C. Dizon and Maria Elinora Peralta-Imson and is published in 1994 by University of the Philippines Press.
Please select one favorite post on a Spanish-language author or topic from the in lieu of a field guide archives.
I think my multiple posts on the Quixote and Quixote-like novels allowed me to reflect on the nature of fictional reality and deepened my understanding of the novel.  The translation by John Rutherford is superb.
One of my favorite posts from Rise: A cosmogony of Javier Marías's major fiction.