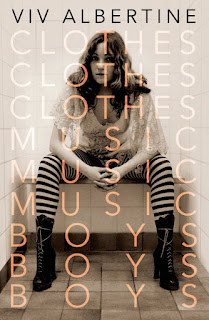 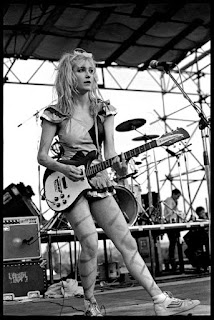 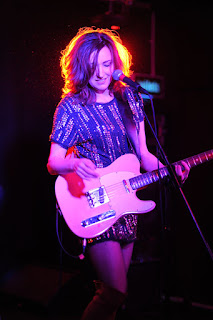 Viv Albertine then & now (photos: top, David Corio, 1980; bottom, Michael Putland, c. 2014)
*
When we arrive in Philadelphia, we decide to pay Sun Ra a visit in homage to his great music.  We don't know how to find him so we do what we'd do in England and look him up in the phone book.  Phone directories are inside public phone booths in America, same as England.  We look under Sun, but find nothing, we feel a bit foolish but we also check under Ra, and there it is: Ra, Sun - followed by his number and address.  Someone suggests we call and check he's in (not to ask if he wants to see us), someone else shouts 'No no!  It's destiny, of course he'll be in!'  We all agree we should just take a chance and turn up, so we pile back into the van (Ari, Tessa, Bruce, Steve Beresford, Christine Robertson - who co-manages us with Dick O'Dell - and Dave Lewis, who later plays guitar with us) and navigate through Philadelphia, past rickety clapboard houses with stoops, stopping and asking directions whenever we get lost.  It's Hallowe'en, we're dressed in our usual stuff but the people we stop peer past Christine, who's driving, into the back of the van and ask if those are our Hallowe'en costumes.  We arrive at Sun Ra's small terraced house; it's very ordinary and modest with a front gate, short path and plain front door.  Not what I imagined at all, I thought there'd at least be a plaster planet on the gatepost or something.  We knock, hopping from one foot to the other like children on the doorstep of a birthday party - Christine and Dave stay in the van so we don't overwhelm Sun Ra - no answer.  We knock again.  The next-door neighbour opens her front door: 'You lookin' for Mr. Ra?'  'Yes!' we chorus.  'He's away on tour right now.'  She gives us a quick look up and down and immediately shuts the door.  Still, we got to see Sun Ra's house and Sun Ra's street and talk to Sun Ra's neighbour.  Result.
(Clothes, Clothes, Clothes.  Music, Music, Music.  Boys, Boys, Boys., 236-237)
Publicadas por Richard a la/s 22:02 7 comentarios: