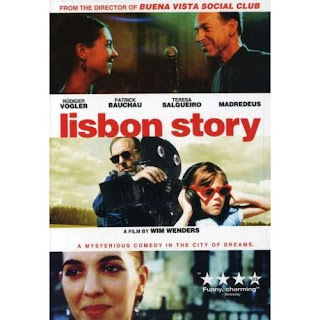 Lisbon Story (2007 DVD)
Directed by Wim Wenders
Germany and Portugal, 1994
In English, German and Portuguese with English subtitles
A humble, unconventional love story set in Portugal's capital. While I've never been there except in my mind, it's easy to fall in love with Wenders' Lisboa. In fact, you could even argue that the city is offered up as one of three elusive love interests in the film the way the camera lavishes attention on it. The other poles of attraction include both the equally unexpected (the art of moviemaking itself) and the much more traditional (Madredeus singer Teresa Salgueiro, playing herself in a role that must have inspired hundreds of crushes), all told from the genial POV of a nerdy German sound engineer (Rüdiger Vogler) who's in the process of discovering that the best way to get to know the city is to surrender to it. Sweet and almost totally unaffected. (http://www.lionsgate.com/)
Publicadas por Richard a la/s 22:25