"It's a Beautiful Day to Be a Chicano" 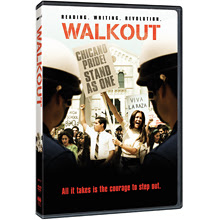 Uneven but moving made-for-cable TV movie about the 1968 East L.A. Chicano student walkouts aimed at protesting Mexican-American kids' marginalization at the hands of their own school system. While this overlooked moment in US civil rights history was a real eye-opener for me, I can't help but think that it would have been much richer as a documentary rather than a dramatization. As it is, the work's weaknesses (a slightly formulaic nature at times, a major character whose "secret" identity as a police informant/infiltrator is fairly obvious from the get-go) ultimately succumb to its strengths as an inspirational story based on people and events you'd like to learn more about. A commentary track with director Olmos and executive producer Moctesuma Esparza, himself one of the real-life leaders of the walkouts portrayed in the film, is exceptional at fleshing out the period detail and providing a you-are-there immediacy cargada de emoción. In spite of a few flaws, an impressive achievement. (www.hbo.com/films/walkout)
Publicadas por Richard a la/s 12:15