The Divine Comedy I: Inferno 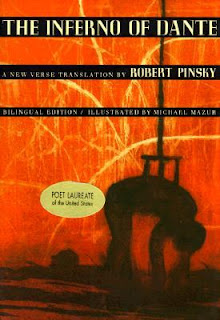 The Inferno of Dante [Inferno] (The Noonday Press, 1997)
by Dante Alighieri [bilingual edition with a verse translation from the Italian by Robert Pinsky]
Verona, 1314

While reading poetry in translation is easily the compromise of all compromises, I have nothing but good things to say about how well Robert Pinsky's free verse translation of the Inferno flows (i.e. I can't speak for how accurate the translation is, but it reads like a thing of beauty terza rima or not).  Of course, it helps that the Inferno itself is so freaking good!  Since you can find better summaries of Dante's Virgil-led journey through the nine circles of hell elswhere, I'll merely mention a few of the things that made reading this so involving for me.  First up, there's that unresolved tension between Dante the poet and Dante the character in the poem.  While it takes a rather large amount of moxie to write yourself into history as the sixth world class poet in a continuum of "giants" including Homer, Horace, Lucan, Ovid, and Virgil (Canto IV, 70-87), Dante the poet's apparent hubris is lessened by the amount of times Dante the character is literally cowering in fear throughout his journey through the underworld.  In addition, there's something all too human, if not very forgiving from a Christian point of view, about Dante's reactions to particular shades he meets in hell: "and death to your family line," he angrily tells off one already-suffering victim late in the poem (Canto XXVIII, 100).  Although these "two Dantes" combine to form a fascinating character study, both poet and pilgrim at once, a second thing that's no less arresting from a psychological point of view is the Inferno's novel conception of the underworld.  Heroes from antiquity, various clerical and lay figures from recent history in the Italian city states, and even figures from literature and myth all vie for the reader's attention, forming an underworld cosmos that's like a hall of fame of the pagan, Christian, and schismatic damned.  While Dante's visceral descriptions of the punishments that are meted out are well worthy of his fame, I was actually more wowed by how you might run into Minos one minute and Saladin or a troubadour holding his decapitated head in his hands in the next.  Truly inventive.  Finally, Dante's own prowess as a poet is undeniable even in translation.  Whether providing a simple description (Canto II, 45-46: "her eyes out-jeweled the stars in splendor"), a provocative metonym (hell is described as "sorrow's hospice" in Canto V, 15), using repetition and contrast in close order (Canto XIII, 66-68: "My mind, in its disdainful temper, assumed/Dying would be a way to escape disdain,/Making me treat my juster self unjustly"), or trotting out a Homeric simile updated for the 14th century ("Like those who shake,/Feeling the quartan fever coming on--/Their nails already blue, so that they shiver/At the mere sight of shade--such I was then," we read in Canto XVII, 75-78), the poet is always up to the challenge, always in charge of his métier as a craftsman.  Amazing stuff, no?  Ha, what a surprise! 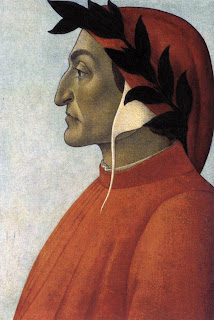