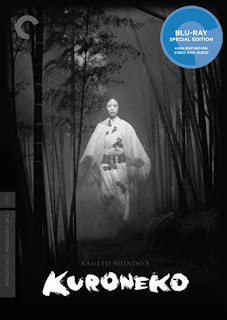 Kuroneko [Yabu no naka no kuroneko] (The Criterion Collection DVD, 2011)
Directed by Kaneto Shindo
Japan, 1968
In Japanese with English subtitles

Although I'm probably not the best judge of ghost stories ever, I don't think I'm really going out on a limb by saying that Kuroneko [a/k/a Black Cat], a/k/a "a vintage Japanese ghost film not named Ugetsu," is both ridiculous and stylish at one and the same time.  In any event, it's easily the coolest looking movie I've seen in quite a while thanks to the collaboration between director Kaneto Shindo and cinematographer Kiyomi Kuroda.  Set near the Rashomon Gate in Kyoto in the Sengoku period, when roving bands of samurai terrorized the land, and shot in an exquisite black and white that reminds me a little bit of Dreyer's spectral Vampyr, the film follows the supernatural transformation of two peasant rape-and-murder victims who come back to life as black cats after death to take their revenge on samurai everywhere.  When the man who's the husband of the younger "catwoman" and the son of the older one returns after a three-year absence and seems to recognize the spirits of his missing loved ones, his newfound samurai status seriously complicates the longed-for family reunion--first, because he's been assigned to kill the samurai-killers or be killed himself; second, because they in turn have sworn a vow to feast on samurai blood until all samurai are dead; and third, because the brave Gintoki doesn't know whether the two specters are just ghosts or demons.  Even though the dialogue boasts its fair share of howlers and I didn't find the film's alleged feminist overtones quite as provocative as others seem to have done, Kuroneko's visual style is so artful and striking in composition that it more than makes up for its creaky narrative.  For example, multiple shots of people traveling through a bamboo grove at night, all the fog-shrouded scenes where humans and shapeshifters do battle, and--perhaps my favorite individual freezeframe candidate of all--the stunning image of a lone rider racing on horseback in front of a blazing, nearly full-screen, golden sun are all just awesome to behold.  Surrealistic, too: I mean, hey, what's that woman doing with a cat arm in her mouth?!?  (The Criterion Collection)

Kuroneko, watched in a spectacular Blu-Ray transfer from Criterion, is the first of what I hope will be at least two February picks for Caroline's World Cinema Series and my own Foreign Film Festival.  See other February movie reviews here.
Publicadas por Richard a la/s 00:07