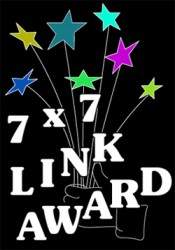 2. Link to a post that you think fits the following categories: Most Beautiful Piece, Most Helpful Piece, Most Popular Piece, Most Controversial Piece, Most Surprisingly Successful Piece, Most Underrated Piece, Most Pride-Worthy Piece.
3.  Pass this on to 7 fellow bloggers.
I'm going to anti-climactically pass on this passing on part since the chain-mail aspect of blogging awards doesn't appeal to the non-community builder/non-Victorian swooner in me.  I hope you'll all feel free to participate if you like, though, since the posts of the other bloggers I've seen who have chosen to participate to this point have provided plenty of pleasant diversions for me.  In the meantime, thanks to Caroline and Himadri for the invites!  Their own responses to the 7 x 7 survey, by the way, can be found here and here.  Other respondents of note: Emma; Guy Savage; Litlove; Obooki.
Publicadas por Richard a la/s 19:15