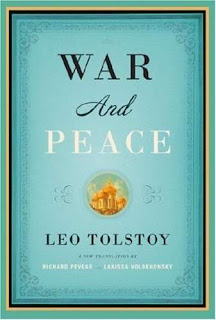 War and Peace [Voina i mir] (Vintage Classics, 2007)
by Leo Tolstoy [translated from the Russian by Richard Pevear and Larissa Volokhonsky]
Russia, 1869

Thinking she was sure to turn my wiseacre 1,215 page proposal down, I challenged Nicole from bibliographing to read War and Peace with me as part of her 2011 bibliographing Reading Challenge in which followers of her blog were encouraged to participate in a personalized one-book, pre-1939 shared read with her.  Unfortunately for the good sport Nicole, she took me up on the dare and pretty much hated the work.  Unfortunately for the spoilsport me, starting and then finishing the work over a full year after my challenge partner did still left me little time to say anything much about it until I return to Caravana de recuerdos headquarters sometime next week.  What follows will have to suffice as an inadequate intro for now.

*
Whatever its apparent flaws (an annoying opening party sequence, its occasional bloated masterpiece tendencies, that anti-climactic epilogue in which stirring novelistic narration abruptly yields to dry essayistic argument), War and Peace was probably about as satisfying a way to end the reading year for me as anything I could have asked for.  In fact, I'm sure it was because the book version of post-partum depression that kicked in once I lay the work down felt nearly as crushing as it did after I finished 2666 (my usual yardstick for measuring these sorts of things).  I never get that feeling from lesser novels.  So what will I miss most about the chunkster until I can make time for the inevitable reread?  For starters, I loved how Tolstoy went to war on the idea and form of historical fiction itself.  In a work dominated by Napoleon's invasion of Russia, you might reasonably expect a great writer to set down memorable battle scenes that admirably capture the fog of war.  Check.  You might also expect the characterization of real-life field marshal rivals like Bonaparte and Kutuzov to be as "realistically" fleshed out as the characterization of the fictional Prince Andrei, Count Bezukhov, and Natasha Rostov.  Check.  But what you couldn't have expected--or at least, what I didn't expect in my W&P naïvety--was to find a novel that also doubles as an inquiry into the nature of history and its methods.  While not exactly a case of Man vs. Novel, War and Peace's envelope-pushing novel/history hybrid continually begs the question: novel + history = what exactly?  Beats the hell out of me, but I was both surprised and delighted by the genre mashing even though I readily admit that the epilogue's attempt to come to grips with the root cause of the Napoleonic wars is less successful from an entertainment standpoint than the very story it serves as a commentary on.  Another thing I'll miss are all the unresolved tensions in the work.  Tolstoy spends much of the epilogue arguing against the great man theory of history, for example, in effect declaring that the decisions of the Napoleons and Alexanders of the world are as nothing compared to the unknown forces that move millions of men to act in a certain way.  While trying to arrive at a philosophical explanation of what moves men to go to war with each other against their own self-interests, Tolstoy at one time even blames "the spread of printing" for being "that most powerful tool of ignorance" in our "self-confident time of the popularization of knowledge" (1202).  Pot calling the kettle black or a thinker who is raising the bar on his medium of choice?  For me, I found Tolstoy an arresting thinker even when I disagreed with him.  Finally, I'll definitely miss Tolstoy's storytelling--both the sweep of the narrative and the often seamless segueways between exposition and meditation, epic similes and historical self-examination.  I'll try to provide a few examples of this in my follow-up post, but I was almost never bored by his writing and I was frequently moved by many individual scenes.  For me at least, a work that lives up to its canonical hype for sure. 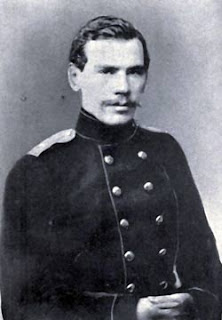 
Thanks to everybody who's visited the blog this year.  I should be back with a less hurried Tolstoy effort next week, but until then please check out Nicole's series of cogently-argued anti-Tolstoy posts below.

War & Peace: a plea
A Tolstoyan "Christmas Carol"
"[I]t made no difference to him, and it made no difference because something else, more important, had been revealed to him."
Sonya and Princess Marya give until it hurts--but which one will give some more?
"All their assaults and attacks on each other caused almost no harm; the harm, death, and mutilation were caused by the cannonballs and bullets that flew everywhere through that space in which these men were rushing about."
Publicadas por Richard a la/s 02:43