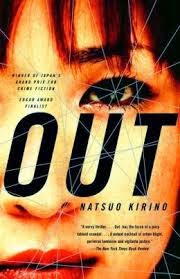 Out [Auto] (Vintage International, 2005)
by Natsuo Kirino [translated from the Japanese by Stephen Snyder]
Japan, 1997

Leaving aside the rather embarrassing matter of how the idiotic Out ever fell into my clutches in the first place, the next time you're thinking about passing up buying an Akutagawa or a Kawabata that you'd like to read for Bellezza's Japanese Literature Challenge 7 and Tony's January in Japan and instead decide to settle on an obviously lesser work just because it's the only Japanese novel you have left on your TBR, please profit from my hard-earned lesson.  Fuck me!  Laughably bad (and yet excruciatingly boring) crime/dismemberment/sadism/social commentary novel in which doltish interior monologues ("An evil omen, she thought, looking away.  Yayoi had just killed her husband.  What could be more ill-omened than that?"), hamfisted descriptions aplenty ("She was sweet, even apart from her value at the club, but for him she was just a fancy pet he liked to spoil.  Like the skin that covered their bodies, his relationship with her was all on the surface"), and unconvincing character exposition/psychology ("He felt it was useless trying to explain to someone as young as Anna that usually hatred was an emotion arising out of the desire to be accepted by another person, and it didn't apply in this case") (52, 179-180, 233) all go to show that there's a reason Natsuo Kirino's never mentioned alongside the likes of Chandler and Hammett and Highsmith (never mind Proust and Musil and Woolf).  Perhaps worst of all, in a "feminist" novel (not my idea) which spends 400 pages building up to an entirely predictable game of cat and mouse between its resourceful but love-starved protagonist and the sadistic murdering rapist who's out to get her, Kirino has the supermarket paperback novelist's gall to suggest that the two characters are just two peas in the same Stockholm syndrome pod (376):


She knew now that his hatred was on the verge of erupting, and that he seemed to be enjoying the game of pushing it to the brink.  She had seen the amusement in his eyes, seen how much pleasure it gave him to play cat and mouse with her.  But she'd also seen that something in him was unhinged and impelling him toward an explosion.  That same thing was inside her, too: it was the part of her that had secretly thought she might be willing to die as long as it was at his hand.

Drivel.  Or as The New York Times Book Review would have it: "A nervy thriller...  A potent cocktail of urban blight, perverse feminism and vigilante justice."  Like I said. 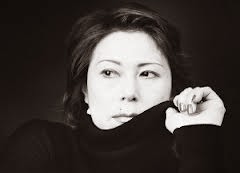