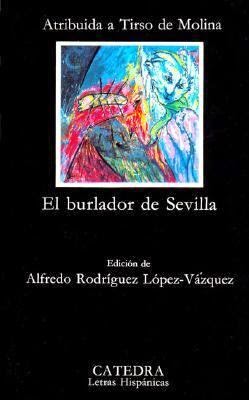 El burlador de Sevilla [The Trickster of Seville], a c. 1630 play usually attributed to Tirso de Molina, is June's 2014 Caravana de recuerdos Ibero-American Readalong selection coming to you direct from the lands of LA FURIA ROJA.  I'd apologize for announcing this group read selection so late, but the work's barely 100 pages long and shouldn't be too hard to get a hold of for those interested in reading along with "us" during the last few days of the month (note: since this is currently an, ahem, "one-man group read," I'd be happy to read the play with you during the first few days of the Spanish Lit Month festivities in July if that sounds more appealing to you--first of you to commit gets to decide the late June or early July thing).  So why El burlador de Sevilla?  Seduction.  Swordplay.  Revenge from beyond the grave.  Its status as one of the first (if not the first) works to introduce Don Juan, the infamous seducer of women and "el personaje más universal del teatro español" ["the most universal character in Spanish theater"] according to the copy on the back of my edition, and one of the undisputed highlights of Spanish literature from the time of Cervantes means relatively little to me.  Just like in real life, I'm all about the seduction and the swordplay and the revenge.  How about you?