"Yo el Supremo": Historical Fictions I 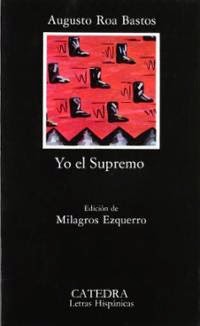 
"You, a Jesuit in Paraguay?  I must confess this is a strange world that we live in."
(Voltaire, Candide)

[Now I must dictate/write; note it down somewhere.  That is the only way I have of proving that I still exist.  But isn't being buried in writing perhaps the most complete way of dying?  No?  Yes?  Well then?]
(Yo el Supremo, 143; I the Supreme, 45)

Having already admitted on Friday that I'd failed you in at least three key respects re: my initial description of Yo el Supremo, I'd like to subject you to two follow-up posts to at least touch on the novel's humor, its war on language, and its curious approach to history (note: those who can recognize the Supremo style captatio benevolentiae in the words "subject you" should feel free to skip ahead to the next post).  Hell, maybe we can even finally find a little time to discuss what the novel is "about."  On that note, I'd like to draw your attention to some of the incredibly rich, unusually complex historical fictions at play in the work.  About three-quarters of the way into the novel, for example, the Supremo/Supreme, in a rare meditative mood, suddenly confesses that "tengo pocos amigos" ["I have few friends"] (400 in the original, 253 in Helen Lane's translation).  No real big revelation from a tyrant, of course, except for the fact that this confession appears to take place from somewhere within the historical echo chamber of his resting place--the Supreme is dead.  One of the friends who comes to visit him on occasion in the afterlife, though, is General Manuel Belgrano (1770-1820, i.e. another dead man), the Argentinean independence leader who had a complicated relationship with the Paraguayan supreme dictator during his lifetime due to the usual invasions, wars, and failed alliances that made the two men regional antagonists.  However, death is nothing if not the great equalizer and the Paraguayan host tells his Argentinean guest--whom he refers to as "la nebulosa-persona" ["the nebula-person"]--that "sumergidos en esta obscuridad, no nos distinguimos el uno del otro.  Entre los no-vivos reina igualdad absoluta" ["submerged in this darkness, we are indistinguishable.  Among the non-living absolute equality reigns"] (Ibid.).  A brief but psychologically penetrating/convincing for phantasms passage follows in which the dead Belgrano tries to console the dead and despondent Supreme by quoting Horace to which the Supreme in turn recounts Belgrano's satisfying end where, despite suffering the horrible effects of the dropsy, the general managed to stave off death long enough to return to Buenos Aires to die as a state hero with a funeral and other fanfare fit to mark his passing.  "Lo mío sucede al revés" ["My fate has turned out to be precisely the opposite"], the Supreme tells Belgrano on pp. 402-403/255:

[All I have had to do to occupy my time is flop about in my sewer-hole.  Betrayed by those who fear me most and are the most abject and disloyal.  In my case they offer me funeral rites first.  Then they bury me.  After that they dig me up again.  They throw my ashes into the river, some people claim; others, that one of my craniums is kept in his house by a traitorous triumvir, and then later brought to Buenos Aires.  My second cranium remains in Asunción, according to those who think they know all the answers.  All this many years later.]

For those weaned on the Kristin Lavransdatter school of historical fiction in which the tired and sleep-inducing raison d'être would seem to be to deliver a dopey "medieval" costume drama-cum-soap opera and jazz it up with a period detail like the bubonic plague, the hallucinatory qualities and the surrealistic telescoping of time evident in this excerpt from Yo el Supremo must seem like quite an envelope-pushing departure from the rules of the game.  However, as Milagros Ezquerro points out in her introduction to the work, Roa Bastos declared in a 1974 interview that his novel "no es una narración histórica, ni menos una biografía novelada" ["is not a historical narrative, nor even less a novelized biography"] (70).  So what is it?

At the possible risk of disagreeing with Roa Bastos himself, I think that one of the most ambitious things that Yo el Supremo does is to attempt to novelize Paraguay itself.  The polyphonic text, as others have pointed out before me, isn't limited to a blow-by-blow of events occurring in the dictator's reign, and the presence of so much guaraní alongside the expected español is probably less a stylistic tic than an effort to pay homage to Paraguay's bilingual culture.  Another thing that Yo el Supremo does with its mosaic presentation of texts literally offset by other texts is to raise an objection to the idea of objective reality by dismantling the barriers between novel and commentary and between history and literature.  And yet another thing--well, more on that later.  In any event, fictionalizing the real life José Gaspar Rodríguez de Francia--who, as Milagros Ezquerro notes, is never mentioned by name in the novel (71)--is just the starting point and not the end game.  How does Roa Bastos go about all this?  To start with an example in somewhat dubious Suetonian taste, let's take a look at the Supreme's Neronian firing squad humor as applied to a slave who had displeased him.  The set-up?  The sight of a black kid frolicking in the Kará-kará river leads the Supreme to reminisce about the slave servant named José María Pilar who had once betrayed him: "Tuve que hacerle curar sus llagas ladronicidas bajo el naranjo.  La pólvora es siempre buen remedio para los enfermos sin remedio" ["I was obliged to send him to the orange tree to cure him of his ladronicidal ills.  Gunpowder is always a good remedy for those whose ills are irremediable" (201 in the original, 91 in the translation; the character's pun on "buen remedio/sin remedio" loses a little something in translation, but I'm pleased to note that our translator's neologism for "ladronicidal" will yield quite vanity-producing results for me if you try punching it into Google).  Not so funny a remark from the Supreme?  That's OK, there's no accounting for taste.  However, the real reason I wanted to include the quip is for its ensuing illustration of the strange ways that humor and history go hand in hand in the novel.  As it turns out, the "traidor ayuda de cámara" ["traitorous valet de chambre"] José María Pilar had a son named Macario who became the Supreme's godchild and was eventually freed only to disappear.  In the following paragraph, we hear about his fate (201-202 in the original, 92 in the translation):

[Macario disappeared as a child.  Vanished.  More completely than if the earth had swallowed him up.  He disappeared in one of those ignoble cheap novels that migrant scribes publish abroad.  Macario was abducted from reality, stripped of his good nature so as turn him into another traitor in the unreality of the written word.]


As a trope, the reality or, here, the unreality of the written word is a rich vein of gold in this novel.  On the one hand, in this scene it serves as an introduction to the Supreme's recognition that written words themselves are a poor substitution for the true reality that can only be found in oral culture or in nature.  "Madrasta-naturaleza, más hábil que los más hábiles pasquinistas" ["Stepmother-nature, more cunning than the most cunning pasquinaders"], he intones.  "Tu imaginación no necesita del instinto de la imitación; hasta cuando imitas creas algo nuevo.  Encerrado en este agujero, yo no puedo sino copiarte" ["Your imagination does not need the instinct of imitation.  Even when you imitate you create something new. Shut up in this hole, I can but copy you"], he laments after seeing the sun go down (202 in the original, 92 in the translation).  And on the other hand?  This is where we return to what I was getting at about novelizing Paraguay.  As befits a work in which Candide's visit to Paraguay is treated as an actual historical event as real as the longtime presence of Jesuits in the country, I chuckled with OULIPO-like delight when I discovered Milagros Ezquerro's footnote explaining that Macario Francia, the son of the executed slave who went missing as a child, isn't just any character but is a character straight out of Roa Bastos' 1960 novel Hijo de hombre.  In other words, that earlier novel, which deals with the aftermath of the Paraguayan/Bolivian Chaco War of the 1930s, has been stealthily inserted into the very fabric of this novel by the "migrant scribe"--Roa Bastos during an earlier exile from Paraguay--in an act that in effect adds his story to the history of his country.  When you consider the Supreme's allegation that our exiled novelist had "abducted" the Macario character from reality "so as to turn him into another traitor in the unreality of the written word" all for the sake of "one of those ignoble cheap novels," the Cervantean parallels become almost impossible to ignore.  In other words, it's a strange world that we live in indeed, Candide!
Publicadas por Richard a la/s 22:10