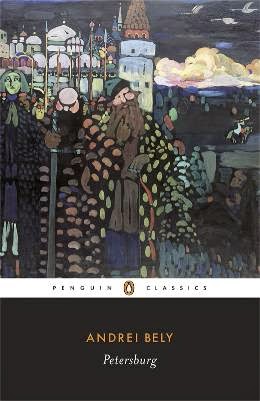 A spiritual ancestor of Musil's The Man Without Qualities in terms of its coupling of a disarmingly playful narrative voice with an idiosyncratic but irresistible storytelling style all wrapped up in the guise of a lurid thriller, Petersburg--hailed by everybody from Nabokov to Obooki and now little old me--is, if anything, somehow even better and more unhinged than I'd been told it was.  Fucking fantastic stuff.  In the Russian Literature of Doom year of 1905, a jittery stranger hands sleepyheaded St. Petersburg student, ladies man, and would be revolutionary Nikolai Apollonovich Ableukhov "a most inoffensive little bundle" ("It's literature, I expect?..."  "Well, no...") in order to blow up--as it turns out--a well known enemy of the people (100-101).  But as fate would have it, the ticking time bomb of a terror target is none other than Nikolai's elderly father, the distinguished senator Apollon Apollonovich Ableukhov, last seen depicted on the cover "of a humorous little street journal" with "completely green ears, enlarged to massive dimensions, against the blood-red background of a burning Russia" (8).  As that last little descriptive bit might indicate, one of the things I loved about this novel was Bely's elaborate exploitation of colors--both in the way that the senator's green ears, a running gag the length of the story, seem to parallel Petersburg's poisonous "green waters, seething with bacilli" (66) and in the way that the establishment politician Apollon Apollonovich himself feels the color red to be "an emblem of the chaos that was leading Russia to ruin" (217).  Similarly, in addition to the tome's prole art threat-style appeal to the visual senses, there's also a corresponding lush audio element to Bely's prose as in the apostrophe to "Petersburg, Petersburg!" in which the narrator addresses the Romanov city as a "a cruel-hearted tormentor" and "an unquiet ghost" pursuing and even attacking his thoughts over the years (66) and in the Homeric epithet-like descriptions scattered throughout the novel such as this one reverse-poeticizing a suburb of Petersburg as the "many-chimneyed, many smoke-columned Kolpino!" (130).  One of the great novels and a surprisingly mischievous one at that--not least because a good chunk of the way into Petersburg and beginning to wonder whether the once loving but now dysfunctional father-son relationship between the two Ableukhovs would ultimately deter young Nikolai from his revolutionary resolve to turn his autocratic senator father into "blood-red slush" (315), I looked at one of translator David McDuff's many helpful footnotes and learned that the snippet of mad, utopian "political" dialogue that had just made me laugh whilst hearing it come out of one of the more crackpot characters' mouths--"The bourgeoisie, sensing its end, has seized upon mysticism: we shall leave the sky to the sparrows and from the kingdom of necessity create the kingdom of freedom" (146)--was actually lifted from that dry Teutonic theoretician Engels.  Too funny! 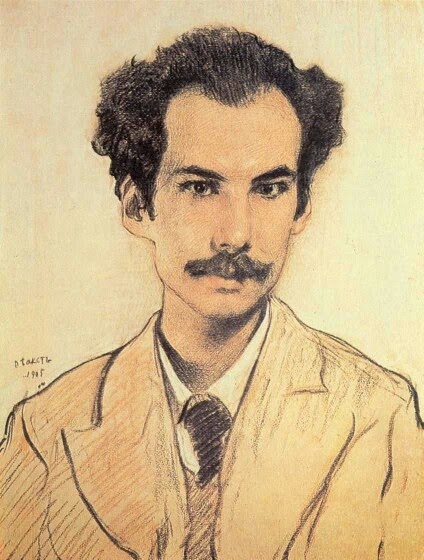 Dwight of A Common Reader, one of the trio of bloggers along with Obooki and Tom whose pro-Petersburg comments were almost 100% responsible for my purchase of the novel over a year ago (thanks, I should have listened to you all a lot sooner!), has written eleven posts on the work.  You can check out Dwight's summary here.  Also, Kaggsy of Kaggsy's Bookish Ramblings has a Petersburg review here; [P] of books, yo has a Petersburg piece here; Steve of languagehat has three posts on Petersburg here, here and here; and Tony of Tony's Reading List has his own Petersburg post here.
Publicadas por Richard a la/s 10:15