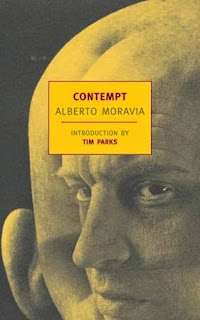 For a no nonsense, stripped down character study about an imploding marriage with virtually no show offy writing other than the occasional extravagant simile and, OK, some masterful psychoanalytic meta engagements with the Odysseus/Ulysses of Homer, Dante, Joyce and Freud, one of the things I most liked about immersing myself in the sea of Contempt's flat prose and suffocating interiority was watching the author heedlessly row himself out as far from shore as possible and then seeing if he could return without crashing onto the rocks of novelistic banality.  Heroic?  Not exactly.  However, it's probably a measure of Moravia's success in the realm of the "boudoir drama" (142) that even Madame fucking Bovary has a more uplifting ending as concerns the "conjugal repugnance" (141) theme!  Whatever, while I suspect that this quick reading but somewhat humorless novel is all too successful a neorealist-like downer for me to ever consider rereading without Technicolor happy pills in hand, two things that make me hedge my bets on that front are Moravia's ironic mean streak in selecting a writer as the poster boy for a self-absorbed intellectual emotionally impotent in the face of his true feelings for another human being (Riccardo Molteni on his wife Emilia: "And so, between us, there was a silence that was only broken from time to time by some quite unimportant remark: 'Will you have some wine?  Will you have some bread?  Some more meat?'...It was, then, a silence that was intolerable because perfectly negative, a silence caused by the suppression of all the things I wanted to say and felt incapable of saying" [116-117, ellipses added]) and a couple of profoundly moving hallucination scenes near the end which touch on the rational and the irrational at the heart of loving somebody while conjuring up the fabled wine dark sea of Homer in primal opposition to modern man's more prosaic and less poetic realities.  Powerful and perceptive but maybe not the perfect book to read if you're currently sleeping alone or have ever lost the girl (or guy) of your dreams to those capricious goddesses known as "Fate." 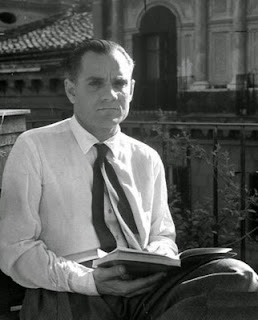