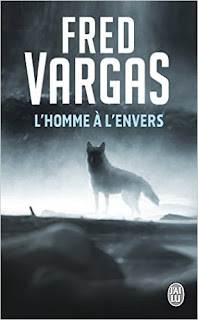 Stupid ending and previsible villain aside, Fred Vargas' L'homme à l'envers [literally Inside-Out Man but Englishized as Seeking Whom He May Devour] was still an otherwise intelligent and entertaining enough page-turner that I wouldn't hesitate to read another of her Commissaire Adamsberg mysteries or to give a try to her so-called Three Evangelists series or even both.  Intelligent and entertaining?  The proof is in the pudding, dude.  For most of the whodunit/"roade-mouvie" (182), Vargas is sufficiently understated and amusing to get away with spinning an audaciously farfetched story in which characters actually debate whether an enormous wolf or an actual werewolf is at all responsible for a series of barbaric wolf attack-like slayings across France.  No mean feat!  Pros: Commissaire Jean-Baptiste Adamsberg is appealingly enigmatic as the intuition- rather than logic-based crime-solving star of the show, and both the Parisian Commissaire and his love interest and even the minor characters are all way more subtly drawn/believable than the narrator Dino in Alberto Moravia's Boredom or the overwrought mother-in-law Fay in Eudora Welty's The Optimist's Daughter (two supposedly "good" books I totally hated and now no longer need to review, thank you very much).  Cons: Although I jotted down a fair amount of new to me French vocab to look up during my time with the novel, I didn't take note of any cool lines to share with you here and my emphasis on characterization above probably should be construed as damning with faint praise.  Bottom line: OK, serviceable prose, not as dumb as most thrillers.  Wait, did I just say a fucking werewolf?!? 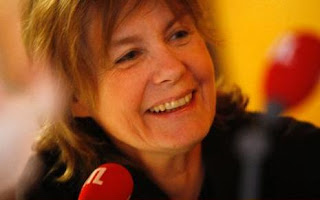