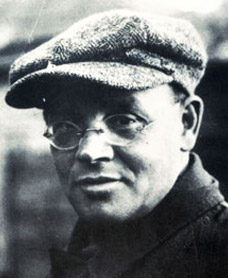 "Crossing the River Zbrucz"
by Isaac Babel [translated from the Russian by Peter Constantine]
USSR, 1926

Rereading Isaac Babel's two-page short story "Crossing the River Zbrucz"--like Zola's "noir" Thérèse Raquin, yet another Doom classic with a totally different vibe but a similarly vivid palette--was a great way to close out my reading month.  In between terse, war reporting-like writing about "the stench of yesterday's blood and slaughtered horses" and of innocents caught in the crossfire of the Polish-Soviet War, Babel's narrator seamlessly slips in lyrical appeals to the senses.  Item: "Fields of purple poppies are blossoming around us, a noon breeze is frolicking in the yellowing rye, virginal buckwheat is standing on the horizon like the wall of a faraway monastery."  Item: "The orange sun is rolling across the sky like a severed head, gentle light glimmers in the ravines among the clouds, the banners of the sunset are fluttering above our heads."  Item: "Only the moon, clasping its round, shining, carefree head in its blue hands, loiters beneath my window."  Then, before you can appreciate an abrupt transition is at hand, you're in a commandeered room with the narrator as he tells how "I find ransacked closets, torn pieces of women's fur coats on the floor, human excrement, and fragments of the holy Seder plate that the Jews use once a year for Passover."  Would that shit were the only thing to be found in that room visited by the dogs of war!