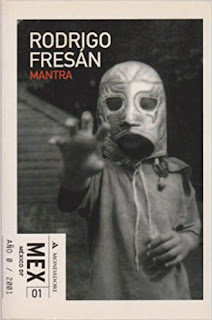 So what might a 2020 Argentinean Literature of Doom novel written in Barcelona but set in Mexico City look like?  Well, I'm so glad you asked!  Three chatty narrators--one about to be dead, one already dead, and one probably lucky not to be dead--weigh in on their association with the shadowy Martín Mantra, who's first introduced to us as a Russian roulette-loving schoolboy with a gun in his hand.  As the quasi-science fiction space time continuum of the 500-plus page opus expands from this, pardon the expression, initial storytelling big bang, the shape-shifting Mantra is revealed to be either the prodigal son of a super wealthy Mexican film- and telenovela-making family, a guerrilla commander in Chiapas fighting under the comic book-like name of Capitán Godzilla, a sort of messianic figure dear to the lucha libre community or maybe all of the above.  While somewhat repetitive in spots, Fresán's freewheeling shaggy dog story has a lot to commend itself to the Des Esseintes aesthetes among you.  Fellow Roberto Bolaño fans, for example, may well laugh out loud with delight as I did upon coming across this otherwise run of the mill description of one of the young Mantra's tutors--"Chileno.  Poeta.  Arturo, se llamaba.  O Roberto" ["Chilean.  Poet.  His name was Arturo.  Or Roberto"], the face and name of the tutor now hazy but not the image of the poet unleashing verses on his listeners from tabletops "como cayeron las bombas sobre tantas otras ciudades" ["like the bombs dropped on so many other cities"].  Uncredited selections from the poems "En la sala de lecturas del infierno" ["In the Reading Room of Hell"] and "Godzilla en México" ["Godzilla in Mexico"] drop the mic at the end of the inside joke (86-88).  Elsewhere, in the long second section of the book narrated as an A-Z of encyclopedia entries, we're treated to an ace six-page set piece on "D.F. (Historia)" ["Mexico City (History)"] told backwards from the here and now of the apocalyptic present  to before the founding of Tenochtitlan--the rewind style leading to such bodily fluid highlights as "Veo a Malcolm Lowry aterrorizado por su propio vómito saltándole a la cara con la ferocidad de un organismo extraterrestre" ["I see Malcolm Lowry horrified by his own vomit pouring back into his face with the ferocity of an extraterrestrial organism"] and "El esperma conquistador de Cortés vuelve a sus testículos conquistadores" ["Cortés' conquistador sperm returns to his conquistador testicles"] (237 & 240).  Mantra, which was commissioned by Mondadori to be the Mexico City entry in a series of novels dedicated to the great metropolises of the world, naturally has more than its share of local color.  The flavors come in varieties 1) expected--the description of a masked wrestling-themed food joint known as El Cuadrilátero ["The Ring"], purveyors of a nearly three-pound sandwich known as "la legendaria torta Gladiador" ["the legendary Gladiator torta"]; 2) unexpected--as in the revelation that the Cafetería El Cuadrilátero actually exists and can be sought out by the hungry reader at Luis Moya 73, Local Cuatro, Colonia Centro (260-262); and 3) super unexpected--get back to me once any of you poseurs come up with a character name as awe-inspiring as Jesús Nazareno y de Todos los Santos Mártires en la Tierra Fernández (a.k.a) Black Hole (a.k.a) Mano Muerta.  For those looking for more doom than comedy, rest assured that you can find it here mixed--a married woman's comic lament that "Yo vivo en el primer párrafo de Ana Karenina" ["I live in the first paragraph of Anna Karenina"] (352)--or straight up courtesy of Joan Vollmer's bitter rant from beyond the grave over being left a permanent resident of Mexico City with a hole in the forehead "y el sonido de mar que hace una bala cuando entra en tu cabeza" ["and the sound of the sea that a bullet makes when it enters your head"] thanks to her hubby William Burroughs' fondness for playing with guns whilst on vacation (496).  Anyway, hope you get the ALoD picture. 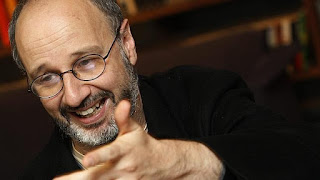