The Professor and the Siren 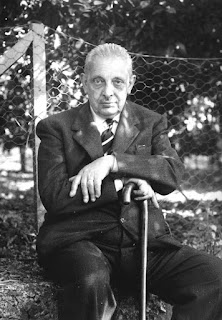 "The Professor and the Siren"
by Giuseppe Tomasi di Lampedusa [translated from the Italian by Stephen Twilley]
Italy, 1961

Since it's been a while since I've shared any short story posts here, I thought I'd celebrate my birthday week this year with a few words in honor of this posthumously published racconto by my near contemporary the great Sicilian writer Giuseppe Tomasi di Lampedusa (above, 1896-1957).  A meditation on the passing of time and the corruption of the flesh told in what eventually takes the form of a perfectly executed fable, "The Professor and the Siren" starts out as the account of a sort of odd couple friendship between a skirt-chasing young journalist and a crotchety 75-year old senator said to be "the most illustrious Hellenist of our time" (5).  Although the story's tone and a certain carnality to the prose initially struck me as somewhat jarring since they were so dissimilar to what I'd remembered of the elegiac The Leopard, I was amused by the Sicilian-centric humor--the senator: "Tell me about our island.  It's a lovely place, even if it is inhabited by donkeys" (10)--and by the "almost obscene metaphors" the classicist traffics in to describe the pleasure of dining on sea urchins: "They are the most beautiful thing you have down there, bloody and cartilaginous, the very image of the female sex, fragrant with salt and seaweed" (11).  About ten pages near the end, though, "The Professor and the Siren" takes an unexpected turn when the senator confides in the journalist his "adventure, an uncommon one" from the summer of 1887 in which he fished a Siren out of the sea.  I promise not to ruin things for you by saying any more about the ending, but this old man loved those final ten pages and the briny goodness of a piece of writing which sings of the frailty of human life and the natural wonders of "eternal Sicily" with such storytelling verve.  Lovely.


Source
"The Professor and the Siren" appears alongside two other short stories in the NYRB collection of the same name (New York: NYRB Classics, 2014, 1-38).
Publicadas por Richard a la/s 02:10