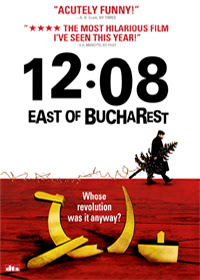 12:08 East of Bucharest (2007 DVD)
Directed by Corneliu Porumboiu
Romania, 2006
In Romanian with English and Spanish subtitles
I probably know less about Romanian cinema than I could fit on a Post-It note, but I really enjoyed this mordant black comedy from first-time feature film director Corneliu Porumboiu. As the movie unfolds, a provincial televison show commemorates the 16th anniversary of Nicolae Ceausescu's fall from power by asking two locals, an alcoholic teacher and a septuagenarian Santa, what they did on the fateful day in question: was there or was there not a revolution in the town similar to the one that forced Ceausescu to flee Bucharest in a helicopter? While the answers poke fun at the holes in the characters' memories as well as at the concept of journalistic integrity itself, some of them also question whether there was really any revolution at all. From there, it is just a short hop, skip and a jump to asking if life has actually improved since the dictator was executed, a question that Porumboiu touches on but slyly evades answering. Bleak? Kind of. But a lyrical sequence of snow falling near the end of the movie is worthy of Kieslowski. (http://www.tartanvideousa.com/)
Publicadas por Richard a la/s 23:03