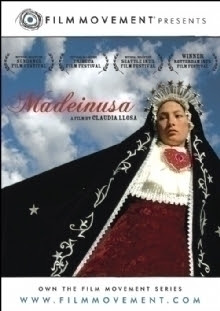 Knockout debut film from Lima to Barcelona transplant Claudia Llosa. While nominally a retrato of what happens when worldly limeño Salvador walks into the life of a sheltered Andean teenager who's desperate to escape her village life, the plot's unexpected twists and turns toy with conventions while eventually leading somewhere else entirely. Magaly Solier, a first-time actress who had never even been to a movie theater in her life before being discovered by Llosa, is completely captivating as the title character; others among the largely non-professional cast are similarly convincing as the villagers inhabiting their own cultural twilight zone in the three days between Good Friday and Easter when it's believed that there is no sin.

While the film's Andean setting, extraordinarily lush visuals and folkloric music give it an otherworldly quality most city slickers should enjoy, others have attacked the film's representation of indigenous life as something of an ethnographic hatchet job. In fact, one newspaper's readers even voted Madeinusa the best and worst Peruvian film of 2006. I find this criticism misguided on many levels. Far from presenting one-dimensional characters on any side of the city-country divide, for example, Madeinusa instead offers "real people" in a carnivalesque dream world of its own creation: a dark fable that looks like Amélie but feels like something out of Juan Carlos Onetti. Best Spanish-language largometraje I've seen in quite some time. (http://www.filmmovement.com/)

*For more on Madeinusa, see the US (top) and international (bottom) trailers below.*