Fantômas, the Genius of Crime 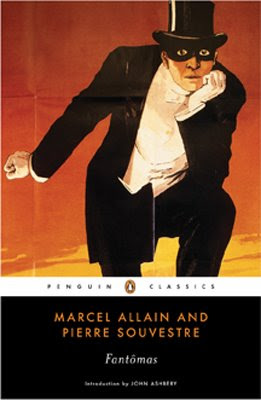 I'm a sucker for a lurid cover, and the near-lookalike above (curiously missing my copy's montage illustration of an enormous Eiffel Tower looming over the city of Paris and not so curiously missing the original poster's menacing depiction of a bloodied dagger) was at least 90% responsible for luring me into the world of the notorious Parisian archvillain known as Fantômas. As luck would have it, my lowbrow tastes were rewarded with a highly entertaining thriller that worked despite mixing the implausible (male characters successfully masquerading as females for extended periods of time) with the even more implausible (Fantômas' unerring ability to escape justice by a variety of increasingly dubious ruses). While John Ashberry's introduction is probably spot on in appraising Allain and Souvestre as "two inspired hacks" (viii), I have to admit that their high cliffhangers-per-chapter ratio and that bad mofo Detective Juve (Fantômas' brilliant but humble nemesis) made this thing fly by pretty quickly. All in all, a fun, deliciously trashy read if not quite "the modern Aeneid" that some would have it! (http://www.penguinclassics.com/)
Publicadas por Richard a la/s 23:01