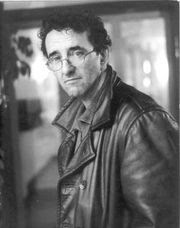 The Millions, a book blog I've been enjoying of late, had a nice post on Roberto Bolaño yesterday in anticipation of the upcoming US publication in translation of his final effort, 2666. I've only read one Bolaño novel in its entirety so far, 1998's Los detectives salvajes, but it was mindblowing enough for me to immediately sink $52.95 into its 1100-page follow-up, 2666, which came out posthumously in 2004 (both put out by Editorial Anagrama in Barcelona). Right now I'm only about halfway through the thing, having taken a couple of pit stops here and there to savor its feverish energy (a Bolaño trademark) and five-books-in-one construction.

I know a book-and-a-half and a couple of short stories aren't much to go on before jumping onto any author's bandwagon, but I'm guessing anybody who's read either Los detectives salvajes or 2666 will understand what the Bolaño fuss is all about. The guy is just great fun to read, and I look forward to moving on to his earlier works when I finish his final one. In the meantime, I have a somewhat embarrassing confession to make: I first "discovered" Bolaño the writer as a character in Javier Cercas' Soldados de Salamina (2001) before realizing that he was an actual person (and one that some would consider the greatest Spanish-language novelist in the last 50 years!). How lame is that?
Publicadas por Richard a la/s 13:30