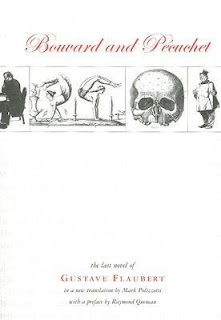 Will assume that most of you reading Life A User's Manual for the upcoming 4/30 group read are already aware of the postcript where Perec admits to borrowing or adapting "quotations" from a number of different writers.  While I'm not far enough into the novel yet to see how meta Perec gets with these fictions, I do look forward at some point to comparing stuff like "The Tale of the Acrobat who did not want to get off his trapeze ever again" (for me, one of the many highlights so far) with Kafka's "First Sorrow" & etc. to see if something other than just a playful rewrite is involved.  For now, though, I'm going to take the lazy man's way out and draw your attention once again to that post that e.r., one of my favorite bloggers anywhere, put up on his blog at the end of last month.  E.R. points out that Gaspard Winckler, the character charged with turning Bartlebooth's watercolors into jigsaw puzzles in Life A User's Manual, learned his craft from a man named Gouttman.  Incredibly, another Goutman with a very similar set of credentials but with only one "t" to his name also appears as a character in Flaubert's posthumously-published novel Bouvard and Pécuchet.  Doing the intertextual math, e.r. hypothesizes that the Goutman of Flaubert's novel could very well be the same Gouttman of Perec's novel reappearing 70 years after his encounters with Bouvard and Pécuchet just in time to train the young Gaspard Winckler in his craft.  An astonishing shelf life for such a minor character, no?

Perec: "Another time, with sudden warmth, [Winckler] told Valène about the man who had taught him his work.  He was called Monsieur Gouttman, and he made religious artefacts which he sold himself in churches and procurators' offices: crosses, medals, and rosaries of every size, candelabra for oratories, portable altars, artificial jewellry, bouquets, sacred hearts in blue cardboard, red-bearded Saint Josephs, china calvaries.  Gouttman took him on as an apprentice when he had just turned twelve."

Flaubert:  "One time she brought along a portly individual, who had small eyes like a Chinaman and a nose like a vulture's beak.  This was Mr. Goutman, a dealer in religious artifacts.  Out by the shed, he took a few items from their boxes: crosses, medallions, and rosaries in all sizes, candelabras for shrines, portable altars, tinsel bouquets, as well as Sacred Hearts made of blue cardboard, Saint Josephs with reddish beards, and porcelain crucifixes.  Pécuchet coveted them all; only the price held him back."

Not sure how important all this is in the grand scheme of things, but it's amusing to note that a character named Gaspard Winckler himself appears in multiple Perec novels.  The puzzles, they just keep on coming!