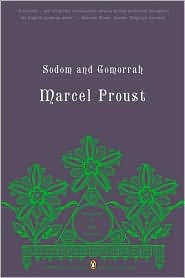 
Having learned what he wanted, M. de Charlus pretended to despise Bloch.  "How ghastly!" he exclaimed, restoring to his voice all its clarion vigor.  "All the localities or properties called 'La Commanderie' were built or owned  by the Knights of the Order of Malta (of whom I am one), just as the places known as 'Le Temple' or 'La Cavalerie' were by the Templars.  Were I staying at La Commanderie, nothing could be more natural.  But a Jew!  Not, however, that it surprises me; it comes from a curious liking for sacrilege, peculiar to that race.  As soon as a Jew has enough money to buy a château, he always chooses one called Le Prieuré, L'Abbaye, Le Monastère, La Maison-Dieu.  I had dealings with a Jewish functionary, can you guess where he resided?  In Pont l'Évêque.  Having fallen out of favor, he got himself sent to Brittany, to Pont l'Abbé.  When, in Holy Week, they put on those indecent spectacles known as Passion plays, half the auditorium is filled with Jews, exulting at the thought that they are going to put Christ on the cross for a second time, at least in effigy.  At the Lamoureux concerts, I had for my neighbor one day a rich Jewish banker.  They were giving Berlioz's L'Enfance du Christ; he was appalled.  But he soon recovered the beatific expression that is usual with him on hearing 'L'Enchantement du Vendredi Saint.'  Your friend is staying at La Commanderie, the wretch!  What sadism!  You must show me how to get there,"  he added, resuming his indifferent air, "so that I can go one day and see  how our ancient domains are withstanding such a profanation.  It's unfortunate, for he's polite, he seems clever.  All he needs now is to live in Paris on the rue du Temple!"  With these words, M. de Charlus seemed simply to be looking for a fresh example by which to support his theory; but in reality he was posing a question whose intention was twofold, the principal one being to learn Bloch's address.  (Sodom and Gomorrah [translated by John Sturrock], 489)
Whilst I'll admit that dropping myself into the middle of Proust's In Search of Lost Time with no previous exposure to the earlier three volumes in the work prob. wasn't the smartest thing I've ever done, I so enjoyed Sodom and Gomorrah after the good couple of hundred of pages or so it took me to settle into its groove that the in media res entry point definitely wasn't the dumbest thing ever either.  Ostensibly a meditation on same sex love in an era when that was still considered a vice in la Douce France, I think it's fair to say the novel is just as much concerned with hypocrisy in general and the variety of masks required to fully participate in society's non-sexual games.  Deception--and particularly self-deception--is the real subject of the "voyeuristic" close-up here, played out in a slow motion storytelling style that will well reward your patience if you give it half a chance.  What do I mean?  Not to be a whiner about it or anything, but nobody ever told me how funny Proust was before--how his celebrated psychological insights often come accompanied with a snifter of world class cattiness in tow!  While the anti-Semitic set piece above is entirely typical in suggesting that being born Jewish in the wake of the Dreyfus Affair was as big a shortcoming as being born gay or being born poor on the sliding scale of the snobby socialites in the novel, note the wonderfully-observed manner in which the narrator communicates that he's aware that the pompous Baron de Charlus' tirade is partially a cover story to mask the closeted character's interest in a potential illicit love interest.  Elsewhere, Proust was a continual revelation to me less for his humor or his subtle ironies than for his ability to combine an OCD level of detail with some surprising insight into his characters' personalities or upbringing.  Remarking on M. de Charlus' laugh at one point, for example, the narrator remarks that the laugh "had probably come down to him from some Bavarian or Lorraine grandmother, who had herself got the identical laugh from one of her forebears, so that it had been ringing out like this, unchanged, for a good few centuries in the lesser courts of old Europe, and its precious quality had been enjoyed, like that of certain old musical instruments now grown very uncommon" (332).  Just a few pages later, the narrator brings another old money character to life by describing her as a remnant of "the epoch when people of breeding observed the rule of being agreeable and the so-called rule of the three adjectives" (335).  I was tickled by the explanation of the latter rule:


Mme de Cambremer combined the two.  One laudatory adjective was not enough for her; she would follow it (after a dash) by a second, then (after a second dash) by a third.  But what was peculiar to her is that, contrary to the social and literary objective she had set herself, in Mme de Cambremer's letters the sequence of the three epithets wore the aspect, not of a progression, but of a diminuendo.  Mme de Cambremer told me in this first letter that she had met Saint-Loup and had appreciated more than ever his "unique-rare-real" qualities, and that he was due to return with one of his friends (the one, indeed, who was in love with the daughter-in-law), and that, if I cared to come, with or without them, to dinner at Féterne, she would be "overjoyed-happy-pleased."  Perhaps it was because the desire to be agreeable was not matched in her by any fertility of imagination or richness of vocabulary that, eager to utter three exclamations, this lady had the resources to provide in the second and third only an enfeebled echo of the first.  There need only have been a fourth adjective for nothing to have remained of her initial affability (335-336).
For anyone who's ever suffered through a poorly-constructed blog post praising or berating some lesser-tier writer, suffice it to say that the astounding level of detail in moments like Proust's diminuendo digression is the sort of thing that will make it all worthwhile!  And moments like these, while likely old hat to In Search of Lost Time veterans, frankly litter the work in question.  That the narrator, so observant in the ways of others, is himself guilty of a very human self-deception when it comes to his own love life and his feelings for the suspected lesbian Albertine, naturally makes me eager to see what happens to him and his loved one next.  In the meantime, I believe I have some catching up to do first: thanks and no thanks to book gangsta Frances of Nonsuch Book, whose encouragement of me to join her little In Search of Lost Time shared read mid-stride has added another 3,000 pages of reading to my TBR now that M. Proust has lived up to the hype yet once again!   (http://www.penguinclassics.com/) 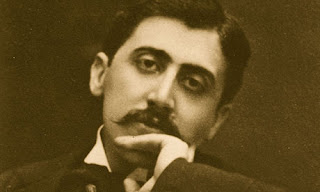