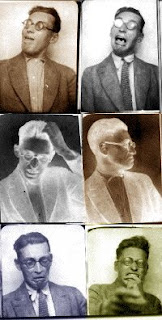 Life A User's Manual is dedicated to the memory of Raymond Queneau (1903-1976), the ex-surrealist and lifelong mathematics devotee who co-founded the Oulipo (Ouvroir de Littérature Potentielle) with François Le Lionnais in 1960.  Key works include the 1947 Exercises de style [Exercises in Style], "a series of texts by Raymond Queneau in which the same inconsequential story is told in 99 different ways,"* and--at the other end of the spectrum--the 1960 Cent mille milliards de poèmes [A Hundred Thousand Billion Poems a/k/a 100,000,0000,000 Poems], "a sequence of 10 14-line sonnets" that, when read in all its possible combinations of interchangeable lines, might take someone reading the book 24 hours a day a total of 190,258,751 years to complete according to Queneau's calculations.**  Not having a calculator handy, I've decided to accept Queneau's figures on good faith.  Source: Oulipo Compendium (edited by Harry Matthews and Alastair Brotchie).  London: Atlas Press, 2005, pp. 14** and 147*.
Publicadas por Richard a la/s 01:01