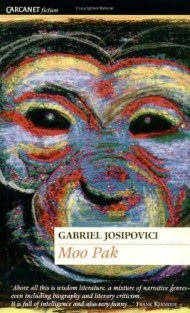 "Why should I write a book of five hundred pages when Homer has said everything I want to say in three lines?"  (Moo Pak, 53)

Truth be told, I'd been predisposed to wanting to like Gabriel Josipovici--a novelist/critic who has written on authors as far afield as Chaucer and Kafka as part of his critical body of work--ever since I learned that Georges Perec's Life A User's Manual led him to write his first and only fan letter in a lifetime devoted to literature. Moo Pak, with its 151-page single paragraph, merely sealed the deal for me.  Sort of a non-snob/post-Oulipian response to that whole My Dinner with Andre concept, all but the final few lines of this talky, talky novel unfold in a series of monologues by one Jack Toledano, would be novelist of a major work in progress.  While Toledano occasionally comes across as a bit of a blowhard when speaking about the state of modern culture, his opinions on life and literature and the aesthetics of reading and writing--faithfully related by a rather retiring walking companion of his--are usually colorful enough that you tend to forgive him for prattling on.  In any event, Josipovici does a nice job in Moo Pak bombarding the reader with metafictional allusions, philosophical tidbits, and the like without quite saturating the text with too many such references.  I also enjoyed how Josipovici pulled off the nifty sleight of hand in which Moo Pak, the novel that Toledano was endlessly discussing and "writing," slyly evolved into Moo Pak, the novel that I was holding in my hands and reading, just before the words trickled to an end.  No Life A User's Manual II or anything like that but a nice homage to the way serious business of the acts of reading and writing. 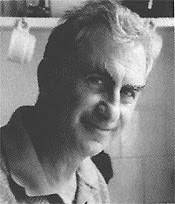 Gabriel Josipovici
If I'm not mistaken, it was this Moo Pak review from Stefanie of So Many Books that led Emily to select the novel for this month's group read.  Next month we'll be taking on a pick from Claire in the form of Kenzaburo Oe's A Personal Matter.
Publicadas por Richard a la/s 22:32