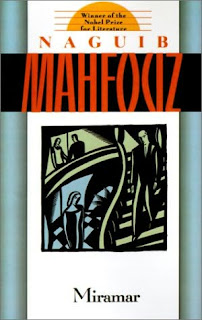 
"Alexandria.  At last.  Alexandria, Lady of the Dew.  Bloom of white nimbus.  Bosom of radiance, wet with sky water.  Core of nostalgia steeped in honey and tears.
The massive old building confronts me once again.  How could I fail to recognize it?  I have always known it.  And yet it regards me as if we had shared no past.  Walls paintless from the damp, it commands and dominates the tongue of land, planted with palms and leafy acacias, that protrudes out into the Mediterranean to a point where in season you can hear shotguns cracking incessantly.
My poor stooped body cannot stand up to the potent young breeze out here.  Not anymore.
Mariana, my dear Mariana, let us hope you're still where we could always find you.  You must be.  There's not much time left; the world is changing fast and my weak eyes under their thinning white brows can no longer comprehend what they see.
Alexandria, I am here."
(Miramar, pp. 1-2)
I've been wanting to read Naguib Mahfouz's 1956-57 Cairo Trilogy for quite some time.  However, having already been burned by Nobel Prize-winning melodrama in Sigrid Undset's utterly exasperating Kristin Lavransdatter trilogy, I must admit that I've been a little leery of the blurbs on the back of Mahfouz's books describing his penchant for combining "deep emotions" with "soap opera."  The 1967 Miramar, a much shorter novel at only 181 pages, thus became my introduction to the author.  Man, what a complete delight!  Four narrators (all from different walks of Egyptian life) take a revolving door approach to the storytelling here, describing the various paths that led each to a fateful stay as a boarder at the Miramar pension in Alexandria.  While much of the drama hinges on the younger boarders' pursuit of a beautiful cleaning lady named Zohra and the death--apparently by foul play--of one of the characters that ensues, Mahfouz uses the pretext of these intersecting lives as a launch pad to touch on the successes and failures of the Egyptian revolution and to specifically question the nature of male/female and city/country relations in the era (it's probably no accident that while the owner of the Miramar and Zohra are both female, it's the males alone who have the "speaking roles").  In any event, I loved the way the novel tackles such weighty issues in such casual, seemingly conversational tones.  Also loved the way that the octogenarian Amer Wagdi's poetic embrace of the city of Alexandria (see his apostrophe above) blends an old man's nostalgia with an awareness of the reality of changing times.  Don't know if all of Mahfouz manages to combine this blend of local flavor, intense historico-political introspection, and man of the street poetry/lyricism, but I'm now more eager than ever to immerse myself in the 1,500 page world of the Cairo Trilogy, soap opera or not! 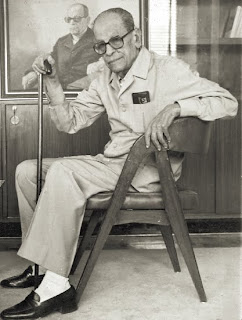 Naguib Mahfouz (1911-2006)
Word Portraits
"Amer Wagdi rambles on about the glory of his own past, deeds for which his own conscience must serve, alas, as the only witness; the old wreck wants to convince us that he was formerly a hero.  So no one is commonplace in this damned world.  And everyone sings the praises of the Revolution.  Even Tolba Marzuq.  So do I.  Take care, I say to myself.  Sarhan is an opportunist and Mansour is probably an informer.  Even the ancient scribbler...who knows?  Madame herself is probably required to keep her eyes open in the service of security."  (Hosny Allam speaking, 62-63)
"At breakfast I was introduced to the other guests.  What a weird assortment!  But I needed a pastime, and if I could get the better of my introversion, I thought, I could find some companionship here.  Why not?  But let's not even think about Amer Wagdi and Tolba Marzuq; they belong to a dying generation.  Then, I wondered, what about Sarhan or Hosny?  In Sarhan's eyes there was a native compatibility.  He seemed sympathetic, in spite of his awful voice.  But what were his interests?  By contrast, Hosny simply got on my nerves--that was at least my first impression of him.  He was arrogantly taciturn and reserved and I didn't like his massive build, his big haughty head, or the way he sat enthroned, sprawling in his chair like a lord, but a lord without any real sovereignty or substance.  I presumed he'd feel at conversational ease only with someone he knew to be even more stupid and trifling than himself.  He who deserts his monastery, I reminded myself, must be content with the company of the profane.  And as usual my introversion got the better of me.  They will say...  They will think..."  (Mansour Bahy speaking, 92-93)
"At breakfast I am introduced to two strange old men.  One of them, Amer Wagdi, is so old he's an actual mummy, but he's a merry old fellow.  They say he's an ex-journalist.  The other is Tolba Marzuq, whose name sounds vaguely familiar.  He's under sequestration.  I don't know what brings him to the pension, but I'm keenly interested in him from the start; anything out of the ordinary is interesting, a criminal, a madman, someone under a sentence or under sequestration.  He keeps his eyes on his cup, avoiding my looks.  Out of caution, I wonder, or pride?  I stare at him with mixed feelings, a sense of triumph over his class mixed with pity for his individual plight.  But I'm strangely alarmed at the thought of the state confiscating property.  After all, it could happen to anyone."  (Sarhan al-Beheiry speaking, 139-140)
Publicadas por Richard a la/s 17:31