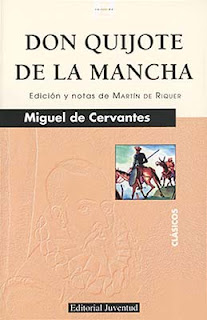 Since blogging has made me obsessive about my reading out of all proportion to the limited number of comments I actually receive here, I hope you'll forgive me this rare non-review/obvious filler post about my reading plans for August.  To cut right to the self-indulgent chase, I basically have a three-pronged plan of attack mapped out this month.  Here it is.


#1: CERVANTES.  Stu at Winstonsdad's Blog is hosting a 10-week readalong of Don Quixote.  I tried to resist this on account of time concerns and whatnot, but I finally caved in when I realized that it wouldn't be any fun to sit this one out on the sidelines while blog pals Claire, Frances, and Rise among others started bombarding me with posts about DQ and Sancho Panza.  While I'm already two weeks behind, this'll be a reread for me and I hope to be caught up with the rest of the gang soon.  See Stu's Don Quixote--Windmills for the Mind page here or his Week Two commentary over here for more info.
#2: FRANCES: WILLIAMS & PROUST.  "Book Temptress" Frances of Nonsuch Book has selected William Carlos Williams' In the American Grain for our monthly shared read with Claire, E.L. Fay, Emily, Sarah, and others to discuss on the last Friday of the month (details here).  A few days later on 8/31, most of the group will be back to discuss Marcel Proust's The Captive (details here), in a Tuesday salon also hosted by the lovely Frances.  Naturally, all are welcome to join us for a laid back discussion of either or both of these titles.
#3: LAT AM & IBERIAN FICTION: While I want to leave plenty of time for the Cervantes and Proust titles in particular, as usual I have a number of Latin American novels and novellas calling my name (Latin American literature is my Twilight, baby!).  I just started Colombian Fernando Vallejo's 2001 El desbarrancadero, voted the tenth best Spanish-language book in the last 25 years in a recent survey.  Other possible candidates, particularly since I'll be looking for some shorter fiction to read in between the chunksters, are Argentinean César Aira's Un episodio en la vida del pintor viajero [An Episode in the Life of a Landscape Painter], Guatemalan Rodrigo Rey Rosa's El cojo bueno [The Good Cripple], and Colombian Evelio Rosero's Los ejércitos [The Armies]--though Argentinean Macedonio Fernández and Peruvian Mario Vargas Llosa have an anti-novel and a novel I'd like to get to this month if at all possible.  So who knows?  From Spain, I'd like to read either Carmen Laforet's Nada or Carme Riera's La meitat de l'ànima, keeping with the Carmen/Carme(n) author theme, natch.  All right, enough already. 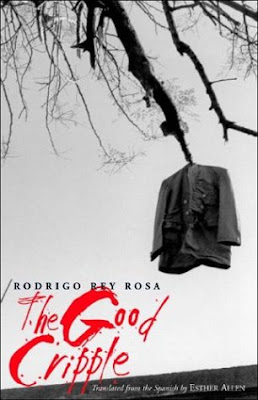 P.S. I have a post about another Rodrigo Rey Rosa novel, El material humano (Anagrama, 2009), pending (i.e. unwritten, ha!).  Great fucking book.  Only problem is that it will be the fourth Spanish language novel in a row I've read that isn't yet available in an English translation--and the Vallejo will make that five.  Quick, how many major prizes does a foreign novel have to win before it gets translated into English?  A depressing state of affairs.
Publicadas por Richard a la/s 01:16