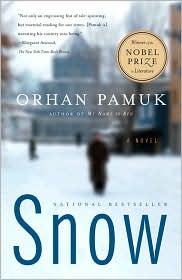 With apologies to the rest of the Wolves and anybody else unfortunate enough to be participating in this month's group read of Orhan Pamuk's Snow, I'm going to be taking a break--maybe a permanent break--from the book to concentrate on books I actually want to read.  Maybe the thing gets better after the first 200 pages.  At this point in time, though, I can't take any more of the novel's excruciatingly boring blend of Mahfouz's The Cairo Trilogy III and Dostoevsky's Demons in its pairing of a dopey, lovesick protagonist and an unengaging, hamfisted political farce.  "An engrossing feat of tale-spinning," my ass.

Pamuk in Action
Here's an example of dialogue from Pamuk (from page 135 in the Vintage paperback, translated from the Turkish by Maureen Freely) that only a YA fan, the Nobel committee, or the apparently easy to please Margaret Atwood could find "engrossing." Whatever.
"I don't want you ever to leave me," Ka told Ipek.  "I've fallen wildly in love with you."
"But you hardly know me," said Ipek.
"There are two kinds of men," said Ka, in a didactic voice.  "The first kind does not fall in love until he's seen how the girl eats a sandwich, how she combs her hair, what sort of nonsense she cares about, why she's angry at her father, and what sorts of stories people tell about her.  The second type of man--and I am in this category--can fall in love with a woman only if he knows next to nothing about her."
"In other words, you've fallen in love with me because you know nothing about me?  Do you really think you can call this love?"
"If you fall head over heels, that's how it happens," said Ka.
"So once you know how I eat a sandwich and what I wear in my hair, you'll fall right out of love."
"No, by then the intimacy that's built up between us will deepen and turn into a desire that wraps itself around our bodies, and we'll be bound together by our happy memories."﻿
Publicadas por Richard a la/s 10:59