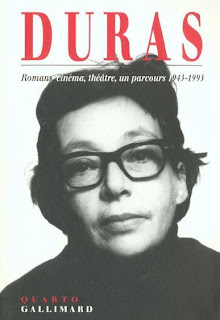 Having heard the 1959 Alain Resnais-directed film version of Hiroshima mon amour critiqued for being cold and/or impenetrable on multiple occasions over the years, I was pleased to discover that Duras' scénario, published the year after the motion picture's debut at Cannes, is poetic and affecting instead--not at all cold nor impenetrable to my way of thinking.  Set in Hiroshima in 1957 and focused on the adulterous fling between a French woman ("Elle") and a Japanese man ("Lui") who meet while la Française is there shooting a film about peace, the screenplay has a sweeping emotional and temporal arc that shifts back and forth between postwar Japan and wartime France and dares to compare the ravages of war with the romantic loss and oblivion of memory that often accompany us during war and peace.  Watching the emotionally shellshocked lovers seek to prolong a connection that they know will be impossible to maintain--unless another war breaks out, as one of them grumpily suggests near the end--one begins to sense that they are stand-ins not only for those who didn't survive the war but those who aren't able to connect with others in a lasting way even in times of peace.  While all I've said to this point might make it seem as if the work would have to be heavyhanded, Duras manages to avoid that somehow through a deft combination of visuals (both the shots from the film that accompany the script and the detailed cinematographic instructions that accompany--and interact with--the dialogue) and a sure hand in conveying the interiority of her characters' thought processes and memories.  And although my rusty French leaves me convinced that I would absolutely benefit from a reread of this work at a more leisurely pace, it doesn't exactly take a genius to appreciate Duras' many subtleties (e.g. three versions of proposed dialogue from Lui in a key exchange near the end of Partie III, versions that Resnais apparently chose to run in succession in the film), the appendix on the movie that adds another layer of complexity to what's to be found in the script (SUR LA PHRASE: "ET PUIS, IL EST MORT": "Riva ne parle plus elle-mème quand cette image apparait.  Donner un signe extérieur de sa douleur serait dégrader cette douleur" [ON THE SENTENCE: "AND THEN, HE DIED": "[Emmanuelle] Riva [the actress who plays Elle] herself doesn't speak any longer when this image appears.  To give an exterior sign of her anguish would be to debase this anguish"] (628), and the unexpected but touching Casablanca allusion amid the proliferation of images of mushroom clouds and parades protesting the wailing of the "100 000 cadavres envolés de HIROSHIMA" ["100,000 cadavers carried away at HIROSHIMA"] (584).  A fine intro for what I hope will be a satisfying long-term relationship between Marguerite Duras and me.  (www.gallimard.fr/ecoutezlire/quarto.htm) 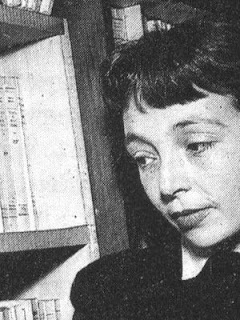 Marguerite Duras
I read Hiroshima mon amour as part of the July stop for Caroline's Literature and War Readalong 2011.  See her blog here for other posts on the film and print versions of the title.  Oddly enough, I couldn't locate a standalone version of the usually easy-to-find screenplay at any of the three foreign language bookstores I checked in Cambridge and NYC during the last month.  Weird.  Luckily for me, my library had a copy of the deluxe 1,764 page Duras: Romans, cinéma, théâtre, un parcours 1943-1993 (Gallimard, 1997) in which Hiroshima appears on pages 533-643.
Publicadas por Richard a la/s 02:13