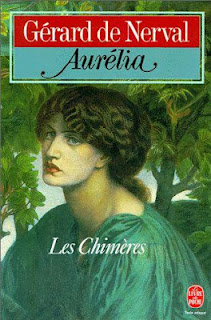 
"Non! disais-je, je n'appartiens pas à ton ciel.  Dans cette étoile sont ceux qui m'attendent.  Ils sont antérieurs à la révélation que tu as annoncée.  Laisse-moi les rejoindre, car celle que j'aime leur appartient, et c'est là que nous devons nous retrouver!"
*
"'No!' I said, 'I don't belong to your heaven.  On that star are those who await me.  They predate the revelation that you've announced.  Let me rejoin them, for the woman that I love belongs to them and it's there where we need to meet each other again!'"
(Aurélia, 10)
Although anybody who knows anything about Gérard de Nerval's mental breakdowns and eventual suicide will probably read Aurélia wondering just where the author's imagination leaves off and his illness begins, those of you who know nothing about Nerval can just sit back and enjoy the wild ride...an autobiographical quest narrative with nods to Aeneas' descent into the underworld, Dante's Vita Nuova and Divina Commedia, and Swedenborgian mysticism, Aurélia--set into motion by the woman who broke Nerval's heart and accompanied by disarmingly casual accounts of his time spent under medical supervision--is perhaps best thought of as a lush, poetic odyssey dedicated to exploring its opening sentence's proposition that "Le Rêve est une seconde vie" ["Dream is a second life"] (3); of course, since no amount of playing pin the tail on the donkey re: genre matters can quite prepare one for the onslaught of oneiric imagery depicting the heaven and hell occupying real estate in Nerval's mind, nobody will fault you if you choose to experience Aurélia as a vision literature-damaged memoir or an extravagant poem in prose on the subject of dreams and madness and a seeker's traipses through a nightmarish Paris instead...Jean Giraudoux, referring to the tradition that a manuscript of Aurélia was fished out of the dead man's pockets by his friends after they were sent to identify Nerval's body at the morgue, has rightfully characterized the work as "une préface passionnément mais volontairement écrite au suicide qui allait l'interrompre" ["a passionately but wilfully written preface to the suicide that was going to interrupt it"] (xviii)--a judgement which makes total sense even if it only hints at Aurélia's more alluring and ecstatic qualities as a reading experience.  A revelation. 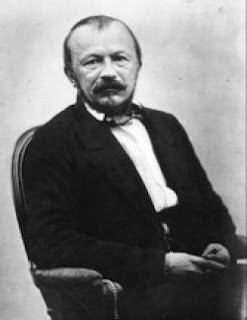 Gérard de Nerval (1808-1855)
Tom of Wuthering Expectations, whom I believe I first "met" on account of this Gérard de Nerval-related post at Caravana here, has written several savvy posts on our troubled French hero and one man doppelgänger.  His No More Death, No More Sorrow, No More Anxiety - The Mad Dreams of Aurélia is as good a place as any to set off on the Wuthering Expectations Nervalmania expedition, but you probably won't want to stop there once you start.
Publicadas por Richard a la/s 23:51