The Argentinean Literature of Doom


This probably won't come as much of a surprise to those of you who are already aware of some of my many vices, but I, ahem, still seem to have a ton of unread books left over from the recent Spanish Lit Month excesses.  So, inspired by various interactive reading projects hosted by both Amateur Reader (Tom) of Wuthering Expectations and Nicole of bibliographing in the past couple of years (and in particular whipped up into a delayed reading frenzy by these two posts by Tom here and a year earlier here), I've decided to devote most of the rest of 2012 to the Argentinean Literature of Doom.  "What is the ALoD?" you ask.  Well, it's not a reading challenge--it's more, like Spanish Lit Month on a more expansive scale but only focused on a single country, a reading project/doomathon designed for me and possibly you to sample some great lit specimens from an often overlooked book culture in the company of a handful of virtual others.  I'm pretty sure that I'll at least in part be looking to test Roberto Bolaño's thesis, mentioned in one of Tom's posts above, that a prominent strain of post-Borges Argentinean literature has been infected by a particularly virulent doom virus.  You, on the other hand, may read whatever you like from the entire corpus of sickly or non-sickly Argentinean letters (as Wilhelm Doommeister, I'll also commit to rounding up the links of all participants' posts at least once a month and sharing them here for others to enjoy).  Having already said that the Argentinean Literature of Doom proyecto isn't a reading challenge, I should probably clarify that there is a reading challenge-like component available for anybody who'd like to take me up on it: using the world-famous "the only challenge that matters rules" popularized by the Wuthering Expectations braintrust, you can "challenge" me to read any work of Argentinean literature with you before the end of the year.  That is, we work out an agreeable schedule that works for both of us and then you and I post on the book, poem, or short story more or less around the same time.  Please note that for things I've already read, I reserve the right to just comment on your post rather than rereading a Rayuela-sized book in its entirety; also, I'm open to a challenge title from any author from a country adjacent to Argentina (Uruguay, Brazil, Paraguay, Bolivia, and Chile) as long as the novelist in question isn't named Isabel Allende or Paulo Coelho--I'd like to be geographically flexible, you understand, but this is the Literature of Doom and not the Literature of Middlebrow we're talking about after all. 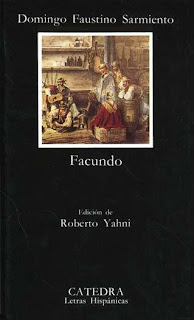 The Argentinean Literature of Doom
runs September-December 2012.* Your attendance is requested but not required.
﻿
Reading Suggestions
Let's say you might want to participate in this project but you're not sure what to read for it.  No problem--no experience necessary.  However, here are a handful of ideas.  If you're of a 19th century bent, you could always read Domingo Faustino Sarmiento's 1845 Facundo [Facundo: Civilization and Barbarism] with Tom from Wuthering Expectations and me at some point during the second half of this month (it's the first Argentinean Literature of Doom "challenge" that's been agreed upon).  Sarmiento's work, written from exile in Chile during Argentina's mid-century civil wars, is a political biography as ethnography and history screed that has had a profound impact on many other Latin American thinkers since its publication.  Other major 19th century works: Esteban Echevarría's "El matadero" ["The Slaughterhouse," reviewed at Wuthering Expectations here], often considered to be one of Latin America's first short stories, and La cautiva [The Captive, possibly unavailable in translation], a long poem having to do with Argentina's Indian wars; Lucio V. Mansilla's 1870 nonfiction Una excursión a los indios ranqueles [A Visit to the Ranquel Indians]; and José Hernández's two-part gaucho epic poem, Martín Fierro, from 1872 and 1879 [described at Wuthering Expectations here and here].

Moving on to the 20th century, you have even more choices--so I'll try and limit myself just to the major names.  Leopoldo Lugones and Macedonio Fernández are said to be two of the bigger deals in pre-Borges 20th century Argentinean letters although Lugones seems to be in decline and Macedonio seems to be in the ascendant right now.  I've read little by either, but Scott from seraillon enjoyed Lugones' Strange Forces short story collection here and E.L. Fay of This Book and I Could Be Friends seemed to like Macedonio's posthumous provocation The Museum of Eterna's Novel (The First Good Novel) here.  Borges' lifelong friends Adolfo Bioy Casares and his wife Silvina Ocampo both have long bibliographies of "fantastic literature" you could choose from, as does crackpot acquaintance J.R. Wilcock although most of his work was written in Italian after he left Argentina for Italy. If, on the other hand, you want a near contemporary of Borges' who was "less literary" and a clear precursor of the Literature of Doom that Bolaño talks about, you could do a whole lot worse than Roberto Arlt and his 1926 El juguete rabioso [Mad Toy] and 1929 Los siete locos [The Seven Madmen].  The latter title, about a plan to foment violent revolution in the Americas through funding obtained from a proliferation of brothels, is visionary fucked-upedness at its best if I do say so myself.

Bypassing Ezequiel Martínez Estrada's essayistic 1933 Radiografía de la pampa [X-Ray of the Pampa] and Leopoldo Marechal's humorously post-Joycean 1948 Adán Buenosayres for the moment, let's jump ahead to the "modern era."  A relatively little known nugget for English readers but a standard in Argentina is Rodolfo Walsh's 1957 Operación Masacre﻿, a pre-In Cold Blood work of "novelistic" investigative journalism.  Of the many Julio Cortázar works you could choose from, I'm most fond of the 1959 novella El perseguidor [The Pursuer, reviewed by Rise of in lieu of a field guide here] and of course the 1962 Boom classic Rayuela [Hopscotch].  Alejandra Pizarnik, who almost went down in history as the woman who lost the manuscript of Cortázar's Rayuela, was a poet whose signature work "La condesa sangriente" ["The Bloody Countess"] is almost surrealistically gory and lyrical. Ricardo Piglia and Juan José Saer, two novelists and critics whose writing and professorial careers stretched from the 1960s up to the 2000s, have both written multiple intellectual but hard-hitting novels that floored me--Piglia's 1980 Respiración artificial [Artificial Respiration] and Saer's 1985 Glosa [The Sixty-Five Years of Washington] probably being my favorite examples of each's work.  Fogwill and César Aira,  two fans of Argentinean Literature of Doom anti-hero Osvaldo Lamborghini (more on him before too long, not to worry), have contributed three of my all-time favorite Argentinean works to date: the 1979 short story "Muchacha punk" and 1983 novella Los pichiciegos [Malvinas Requiem] by Fogwill and the 1987 short story "Cecil Taylor" by Aira.  That's probably way more information than anybody cares for, so fans of either Manuel Puig or Tomás Eloy Martínez will have to pardon me for not saying anything about them here.

*Thanks to Stu, who has agreed to co-host Spanish Lit Month with me again but in a winter month next year, Spanish Lit Month will return in January 2013.  That kind of gives you savvy rule-breakers an extra month to participate in the Argentinean Literature of Doom should you choose to do so.*﻿
Publicadas por Richard a la/s 23:58

Etiquetas: The Argentinean Literature of Doom