In the Spirit of Crazy Horse 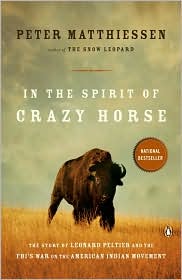 Peter Matthiessen's combative, morally outraged In the Spirit of Crazy Horse, a 600+ page polemic concerning "the story of Leonard Peltier and the FBI's war on the American Indian Movement," is an occasionally frustrating but ultimately powerful account of the June 26, 1975 shootout on the Pine Ridge Reservation in South Dakota that left one Indian companion of Peltier's dead and probably unfairly landed Peltier in jail for the rest of his life for the execution of two white FBI agents who also died there that day.  I say "probably unfairly" because, without passing any judgement on Peltier's actual innocence or guilt in the matter, it's difficult to argue with the conclusion arrived at by Matthiessen that Peltier never really received his fair day in court due to multiple examples of FBI and judicial misconduct.  That being said, one of the most frustrating things about the work is that, in the first half of the book at least, Matthiessen sometimes undercuts the effectiveness of his charges with surprisingly sloppy argumentation: "Many if not most of the FBI agents, fired up by the the sensational press releases being issued by their own superiors, were in a dangerous, vengeful state of mind" he says in one egregiously unsubstantiated moment (195).  "Many," Matthiessen?  OK, maybe.  "Many if not most"?  Suffice it to say that there's no documentation for this assertion.  The irony of all this is that when Matthiessen sticks to the facts, he's an extremely persuasive advocate for the idea that justice wasn't served in the Reservation Murders case.  Among the many strengths of the work, Matthiessen takes great pains to situate the so-called "incident at Oglala" in its historic context through dozens of interviews with the principal players.  His chapter-long portrait of the nascent American Indian Movement (AIM) in the years from 1968-1973 and a pair of chapters on the Wounded Knee occupation and trials in 1973-1974, for example, provide a troubling but much needed political backdrop to what a later chapter terms "The New Indian Wars: AIM Versus the FBI, 1972-75," all of which helps to explain how longstanding patterns of institutional racism directed against Native Americans and violent intra-Indian rivalries between traditionals and goons on Pine Ridge essentially created a climate where the bloodshed of the day in question probably could have been anticipated although maybe not avoided.  A fascinating if ethically unsettling work--not least for the contradictory impressions of Peltier that emerge:


One AIM leader, asked if Leonard was capable of violence, evaded the question with the statement "All Indians are capable of violence; we had to be in order to survive."  Another (who deplored the "violent element" in AIM) claimed to have heard from Pine Ridge people that Peltier was responsible for the killings, and did not think that "a man of violence" should become a hero for Indian children.  This person conceded that Leonard's guilt could be mere rumor, which is epidemic on the Indian reservations; she scarcely knew Peltier personally, she said, because "Leonard was always outside helping build the sweat lodge, or taking care of something else" (437-438).﻿ 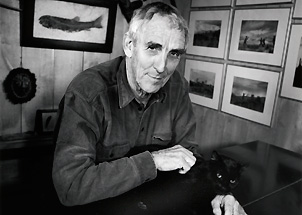