Life and Fate: Part One 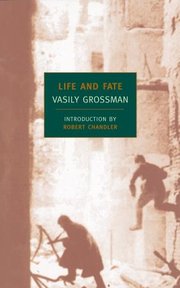 I don't see how Vasily Grossman could possibly keep up this sort of a punishing pace over the course of 871 pages, but Part One of his posthumous epic centered on the siege of Stalingrad but thoroughly consumed with what he calls "the tragedy of the twentieth century" (33)--completed in 1960, confiscated in 1961, but never published in his lifetime due to its ideologically incorrect critique of Stalinist excesses--casts him in the role of a heavyweight prize fighter swinging devastating haymakers right from the sound of the opening bell.  Even when his opponent, the reader, knows what's coming next, Grossman keeps relentlessly cutting off the ring and raining down murderous verbal punches one after another.  You have no choice in the matter but to absorb the beating or to stop reading.  Of course, the brutal "beauty" of Grossman's approach lies in its utter conviction and in its appalling honesty; he doesn't seem to be holding back at all, to be saving anything for the last round.  And why should he?  "Before the war this camp had been known as a camp for political criminals," he writes about a German concentration camp.  "National Socialism had created a new type of political criminal: criminals who had not committed a crime" (21).  "On the fifteenth of September last year I watched twenty thousand Jews being executed--women, children and old men," says one former preacher of the Gospel.  "That day I understood that God could not allow such a thing and that therefore he did not exist" (28).  Viktor Shtrum, a Russian physicist who before the war had never thought about the fact that he and his mother were both Jews, is forced to ponder the inherent irony of the situation when a farewell letter from his mother arrives announcing her imminent death after having been trapped behind German lines and placed in a Jewish ghetto cut off from the outside world by barbed wire: "The century of Einstein and Planck was also the century of Hitler.  The Gestapo and the scientific renaissance were children of the same age.  How humane the nineteenth century seemed, that century of naïve physics, when compared with the twentieth century, the century that had killed his mother" (94).  Naum Rozenberg, an accountant on his way to the gas chamber, for his part inspires an anecdote about the cremation methodologies used in his new occupation until there are no bodies left for him to desecrate but his own: "First they laid dry wood over the ventilation-ditches, then a layer of oak logs--they burned well--then women who'd been killed, then more wood, then the bits of human bodies that were left over, then a can of petrol, and then right in the middle, an incendiary bomb.  Then the Scharführer gave the order; the guards were already smiling as the brenners shouted out; 'It's alight!'  Finally, the ash was shoveled back into the grave.  And it was quiet again.  It had been quiet before and it was quiet again" (201-202).  Given the depressing nature of many of these vignettes, some may wonder whether Grossman is worth reading at all.  Others may merely wonder what the novel format can offer in lieu of non-fiction testimony regarding these horrific truths.  To try to answer the first question in the affirmative while trying to buy more time for the second question until I have a chance to get further into the narrative, for now I'll merely note that Grossman's characters are often so "human" that they're easy to relate to even when their circumstances aren't; this scene, set in House 6/1 at Stalingrad where a beleaguered group of Russian soldiers seems to be the only thing keeping the remainder of the Russian forces from being pushed into the Volga by the superior firepower of the Germans, made me laugh unexpectedly: "Far from terrifying the inmates of the building, the German attacks only succeeded in arousing a certain condescending irony: 'Hm, the Fritzes really are having a go at it today!'  'Look what those maniacs are doing now!'  'The fool--where does he think he's dropping his bombs?'"  (258).  Also, there's no shortage of War and Peace-like attempts by Grossman to understand the complicity of those involved as participant witnesses to the wholesale slaughter.  In Chapter 50, for example, he draws a parallel between the slaughter of infected cattle and the extermination of the Jews by the Germans and of the kulaks and the Trotskyists by Stalin.  How was the large-scale social buy-in achieved?  Without pulling any punches yet again, Grossman, a Ukrainian Jew himself, explains it as follows:


Experience showed that such campaigns make the majority of the population obey every order of the authorities as though hypnotized.  There is a particular minority which actively helps to create the atmosphere of these campaigns: ideological fanatics; people who take a bloodthirsty delight in the misfortunes of others; and people who want to settle personal scores, to steal a man's belongings or take over his flat or job.  Most people, however, are horrified at mass murder, but they hide this not only from their families, but even from themselves.  These are the people who filled the meeting-halls during the campaigns of destruction; however vast these halls or frequent these meetings, very few of them ever disturbed the quiet unanimity of the voting.  Still fewer, of course, rather than turning away from the beseeching gaze of a  dog suspected of rabies, dared to take the dog in and allow it to live in their houses.  Nevertheless, this did happen (213-214).

Taken out of context, the final line above seems to provide a hint of relief.  Grossman, however, keeps probing, jabbing at the ethical scab until it bleeds.  More on the remainder of the pugilistic Life and Fate over the next couple of weeks. 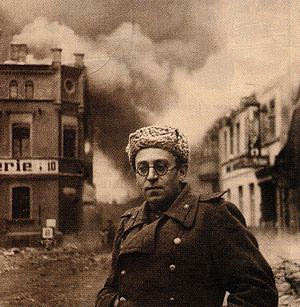