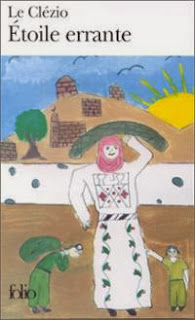 Whatever the esoteric connections among the French-Mauritian J.M.G. Le Clézio, the Frenchman J.M.G. Arcimboldi and the German Benno von Archimboldi that I'd hoped to divine (the obvious thematic parallels: war and exodus and exile + the patron saint of war and exodus and exile, Thanatos), I was somehow wildly unprepared for how totally stunning--and how thoroughly heartwrenching--my first Jean-Marie Gustave Le Clézio would turn out to be.  Obviously, I should have known better.  In any event, the main étoile errante ["wandering star"] of the title is a 13-year old French Jewish girl named Esther Grève, nicknamed Estrellita or Little Star by her father, whose life will devolve into a perpetual flight once the relatively laissez-faire Italian occupation troops flee her quiet mountain town in the summer of 1943 and are replaced by the bloodthirsty Germans.  Arriving in Israel after the war having journeyed over mountain ranges and storm-tossed seas in search of sanctuary, the now 17-year old Esther will cross paths with a sister teenaged étoile errante in Nejma, an orphaned Palestinian girl whose momentary chance encounter with Esther and the simple exchange of names in their childhood notebooks will mark the two of them for life as they go their separate ways fleeing death and destruction in their warzone homeland.  So why subject oneself to a "depressing" fictional coming of age story set against the backdrop of the Holocaust and the beginning of the modern struggle between Israelis and Palestinians?  Well, assuming that at least one of the reasons we all read is to better understand "the human condition," you could hardly ask for a better tour guide to hell than Le Clézio when he's writing on the impact of war and dislocation (physical and psychological) as imposed on children by adults.  When the Jewish children leave the non-Jewish children behind in their flight from the Nazis near the outset of the novel, for example, the young protagonist tries to remember the names of all the friends she knows she'll never see again.  Returning to the Jewish families in flight, she then observes that "ils semblaient des orphelins en promenade, déjà tristes, fatigués, ne regardant rien ni personne" ["they seemed like orphans on an excursion, already sad, worn out, not looking at anything or anyone"].  A moment later, we learn that "c'était la première fois, c'était une douleur, Esther s'apercevait qu'elle n'était pas comme les gens du village" ["it was the first time, it was a sorrow, that Esther realized that she wasn't like the other people in the village"] (92).  Unfortunately for both Esther and the refugee group as a whole on their journey across the mountains, the worst lies ahead near the French and Italian border as the Wehrmacht is about to give new meaning to the term others by turning the ones who can't escape into war orphans.  Elsewhere, Nejma's memoir section draws attention to how the very young and the very old are among the first to suffer when the United Nations abandons them at a critical time of famine and plague and strife with the newcomers: "Ainsi en ont décidé les étrangers, pour que nous disparaissions à jamais de la surface de la terre" ["Thus have the outsiders decided it so that we'll disappear from the face of the earth forever"] (225).  Sound familiar?  On that note, I should probably point out that even though Étoile errante can definitely hold its complex and somber own with something as profoundly wrenching as Vasily Grossman's Life and Fate, it's much more subdued, less pyrotechnic-ridden, in terms of its use of language.  A possible exception: the twin images of "vipères enlacées dans leur combat amoureux" ["vipers entwined in amorous combat"] that frame the beginning and end of Esther's story [344]. And another: the almost musical way in which, aboard the ship bound for the Holy Land, the Hebrew language is described as a balm to Esther amid her suffering when she hears the book of Genesis read aloud (203):

[Amid the silence of the sea, Joel's voice was raised.  He read slowly, in that strange and sweet language, the language that Adam and Eve had spoken in paradise, the language which Moses had spoken in the Sinai desert.  Esther didn't understand, but the words entered into her, as they had done before, mixing with her breath.  The words were resplendent on the sea so blue, they illuminated every part of the ship, even the dirty spots or the places dinged-up by the voyage, even the stains on the bridge, or the tears on the sails.]

Whether or not you're swayed by my two exceptions, part of that apparent simplicity in the novel probably has to do with the mix of first- and third-person narration.  Esther, recounting the wait for the boat that would take her and a group of passengers from Marseille to the Holy Land, rejects the importance of time given all that they had suffered to date: "Le temps a cessé d'exister pour nous" ["Time has ceased to exist for us"] (147).  And part of that probably has to do with a striving for simplicity as an aesthetic choice.  When a friend warns Esther of the dangers that were everywhere in her new home, we are told that "Esther entendait cela, elle voyait la mort qui brillait, dans le ciel, dans les pierres, dans les pins et les cyprés.  La mort brillait comme un lumière, comme le sel, sous les pas, dans chaque arpent de terre" ["Esther understood that, she saw death shining in the heavens, in the rocks, in the pines and cypresses.  Death was shining like a lamp, sparkling like the salt, under their steps, within each acre of land"].  The moral of the story according to our petite étoile?  "Nous marchons sur les morts" ["We're walking on the dead"], both figuratively and literally, as all those "morts...oubliés, abandonnés" ["dead...forgotten, abandoned"] (207, ellipses added) are a living presence haunting the memory of those that survive them.  "Les pierres blanches brillaient ici" ["The white stones shine here"] because "elles étaient les ossements de ceux qui avaient disparu" ["they were the bones of those who had disappeared"] (Ibid.)  You see, there's no need for pyrotechnics with moments like these.  Put another way, is it too early to start talking about the best books of the year or what? 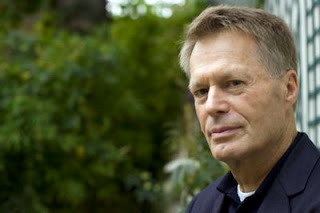 Étoile errante, my first book of the year, was read for the Books on France 2014 Reading Challenge.  Next up: probably either La Chanson de Roland or Baudelaire's Les Fleurs du Mal, who can say?
Publicadas por Richard a la/s 01:34