The Year of the Death of Ricardo Reis 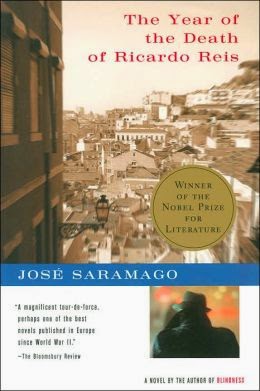 
"Wise is the man who contents himself with the spectacle of the world" is one of three epigraphs appended to this phenomenal novel--part "political fiction" in the manner of Antonio Tabucchi's Pereira Declares, part star-crossed love story, part literary travelogue set in an increasingly ominous 1935-1936 Lisbon just as the storm clouds of fascism were beginning to blanket all of Europe--a tremendous irony since much of what passes for plot in Saramago's soulful metaphysical character study has to do with what happens when a man of culture seeks to live apart from the world for and through his art but finds that a far more difficult task than he'd anticipated.  Far, far more difficult.  That man of culture is of course none other than the 48-year old bachelor Ricardo Reis, a doctor by trade but a poet by calling, who has returned to his native Portugal from Brazil after learning that his good friend Fernando Pessoa has just died--a curious friendship, is it not, given that the history books all tell us that Reis himself was only a product of Pessoa's imagination?  (The imagination: "that mistress of great power and generosity"! [3089/5585])  Although it's a measure of Saramago's storytelling brio that his title character seems to spend an awful lot of time not examining Herbert Quain's work The God of the Labyrinth, the parts of the novel that really got to me had less to do with the Borgesian (meta)ficciones and more to do with the Dante/Virgil-like conversations that Reis carries on with the shade of Pessoa, who has been allowed approximately nine months after his death to spend time with the living.  Does the novel at all propose that being a man of action is more important than being a man of words at a time when scores are being settled by the thousands inside the Plaza de Toros following the Battle of Badajoz?  In a manner of speaking.  But beyond that, it's also an affecting memento mori in which the fragility of life, words, remembrance, everything suggests that the love of a chambermaid maybe ought not be taken for granted in the book of disquiet of one's inner life.  Time, as opposed to loneliness or solitude, is the sleepwalking dreamer's real enemy:

Ricardo Reis crossed the Bairro Alto, descending by the Rua do Norte, and when he reached the Rua de Camoes he felt as if he were trapped in a labyrinth that always led him back to the same spot, to this bronze statue ennobled and armed with a sword, another D'Artagnan.  Decorated with a crown of laurels for having rescued the queen's diamonds at the eleventh hour from the machinations of the cardinal, whom, however, with a change of times and politics he will end up serving, this musketeer standing here, who is dead and cannot reenlist, ought to be told that he is used, in turn or or at random, by heads of state and even by cardinals, when it serves their interests.  The hours have passed quickly during these explorations on foot, and it is time for lunch. This man appears to have nothing else to do, he sleeps, eats, strolls, and composes poetry line by line with much effort, agonizing over rhyme and meter.  It is nothing compared to the endless dueling of the musketeer D'Artagnan, and the Lusiads run to more than eight thousand lines, and yet Ricardo Reis too is a poet, not that he boasts of that on the hotel register, but one day people will remember him not as a doctor, just as they do not think of Alvaro de Campos as a naval engineer, or of Fernando Pessoa as a foreign correspondent.  Our profession may earn us our living but not fame, which is more likely to come from having once written Nel mezzo del cammin de nostra vita or Menina e moga me levaram da casa de metis pais or En un lugar de la Mancha, of which I do not wish to remember the name, so as not to fall once again into the temptation of saying, however appropriately, As armas e os barões assinalados, may we be forgiven those borrowings, Arma virumque cano.  Man must always make an effort, so that he may deserve to be called man, but he is much less master of his own person and destiny than he imagines.  Time, not his time, will make him prosper or decline, sometimes for different merits, or because they are judged differently.  What will you be when you discover it is night and you find yourself at the end of the road (865/5585).

Tom, Wuthering Expectations
History is indifferent to the fine points of literary composition - Saramago's The Year of the Death of Ricardo Reis

Note: I read this wonderful novel, my first by Saramago, in a poorly-formatted and typo-ridden Kindle version that will likely keep me from buying other such works from the publisher (I prefer real books anyway).
Publicadas por Richard a la/s 04:33