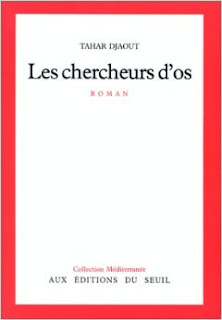 Tahar Djaout was only 30 at the time of the publication of Les chercheurs d'os [The Bone Collectors, unavailable in English] and all of 39 the year he was assassinated by Islamist extremists.  While this depressing biographical note certainly colored my reading of the novel, it'd be a mistake to attribute the novel's emotional power to any sentimentality on Djaout's part: Les chercheurs d'os is a wrenching affair but also a low-key one that's understatedly told.  To help explain the significance of the title, I should probably begin by mentioning that the narrator of the work is a young teenage boy who sets out with a distant relative, Rabah Ouali, in search of the remains of the older brother who had perished three years earlier fighting "l'armée d'occupation" ["the army of occupation"] (140) during Algeria's war of independence against the French.  The ensuing travelogue gives the boy a chance to comment on all of the new sights he's taking in upon leaving his Kabylie village for the first time and gives Djaout a chance to rue the continuing famine and poverty and other aftereffects of the war during the boy's quest for the "os martyrs" ["martyred bones"] of his older brother (44).  Highlights.  As might be expected from a "simple" but convincing first person narration, Djaout is a master of voice and nuance.  At the very least, the older brother's explanation to his younger brother concerning his reasons for joining the resistance--"Le sang est parfois nécessaire" ["(The shedding of) blood is sometimes necessary"] (106)--rings particularly true within the confines of a fictive space which also muses on French military abuses in an evenhanded and non-partisan way.  In one of the more memorable scenes from the novel, for example, Rabah Ouali tells the young narrator about his discovery of a dropped or discarded letter from a father in mainland France which had been sent to the army commander occupying the main characters' village.  The gist of the letter?  The father warns the son not to bring shame upon his "famille très respectable" ["very respectable family"] by perpetrating cruelties on the very people whose country he was occupying so "arbitrairement" ["arbitrarily"]--a perspective which surprises  Rabah Ouali because he never knew "des étrangers" ["outsiders"] existed who shared this view of their land (41).  Great anecdote.  While not a highlight per se, I was also very taken by Djaout's restraint and subtlety.  In a novel ostensibly devoted to the search for and repatriation of the "cadavres héroïques" ["heroic cadavers"] (70) of the fallen and in a novel in which man and boy earnestly discuss whether death arrives and whispers "Je suis la mort" ["I am Death"] to its victims (153), I was hardly expecting to be so won over by non-flashy prose that instead trades in the currency of an almost picaresque-like immediacy (sans the jokes, of course).  Djaout was supposedly murdered, by the way, for having "wielded a fearsome pen that could have an effect on Islamic sectors," a cowardly act to be sure but a cowardly act that proves that even cowardly murderers might know a thing or two about literary criticism from time to time. 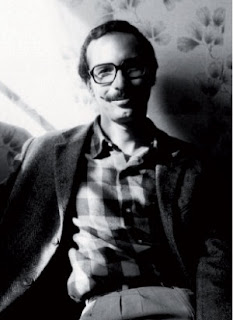