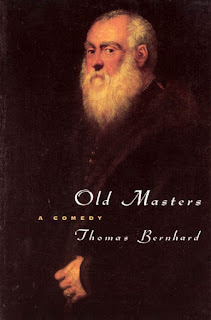 Old Masters [Alte Meister] (The University of Chicago Press, 1992)
by Thomas Bernhard [translated from the German by Ewald Osers]
Austria, 1985

For whatever reason--poor timing, a bad attitude, a fatal case of been there, done that ism mayhaps, who knows?--the insult machine known as Old Masters really wasn't doing it for me until about a third of the way into the indignities.  After that, I kind of wondered WTF I possibly could have been disappointed about early on.  The concluding salvo in Bernhard's bilious, ranting arts trilogy, Old Masters slyly links an art criticism-laced conversation about Tintoretto's The White-Bearded Man held by two old friends at Vienna's Kunsthistorisches Museum with a series of Karl Kraus-like mudballs lobbed at Vienna's true Kultur: e.g. "Viennese lavatories are altogether a scandal, even in the lower Balkans you will not find a lavatory which is quite so neglected" (80).  While the final pages of the work take an unexpectedly-warm-for-Bernhard detour to touch on the importance of love and friendship in this, "our age of chaos and kitsch" (154), insult meister need not be deterred from reading this uplifting Austrian Jonathan Livingston Seagull because the abuse heaped on targets as diverse as the vagaries of the Austrian justice system ("not just arbitrariness but a perfidious machine for grinding human beings" [109]), sculptors ("those brutal common proletarian men of violence with their chisels" [110]), and the common Austrian himself  ("a common Nazi or a stupid Catholic" [122]) proves that Bernhard's defamation ammo is of the same high caliber as usual.  Consumed, with the child-like delight one usually associates with the consumption of the humble ice cream cone, in honor of the German Literature Month V festivities perpetrated by Caroline of Beauty Is a Sleeping Cat and Lizzy of Lizzy's Literary Life. 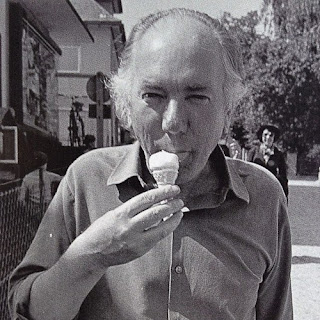