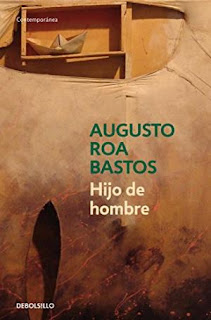 Augusto Roa Bastos' 1974 Yo el Supremo [I the Supreme] was so fucking good--insanely good, in fact--that I had a hunch his 1960 Hijo de hombre [Son of Man] was bound to be a letdown in comparison.  Suffice it to say that it gives me no pleasure to crow about how right I was.  That being said, Hijo de hombre is far from a dud or anything.  A bit of a protein shake of some more or less straightforward historical fiction powder and the tonal bite of those gritty, hard-hitting social realism novels Mario Vargas Llosa would start pumping out a few years later, the work effectively novelizes over a hundred years of high mortality rate Paraguayan history beginning with a nod to Dr. Francia's "Perpetual Dictatorship" (1816-1840), moving on to the War of the Triple Alliance (1864-1870), and then ending with an extended close-up on the brutality of the Chaco War (1932-1935)--this last one a war Roa Bastos himself fought in and one Wikipedia deems the single "bloodiest military conflict fought in South America during the 20th century, between two of its poorest countries."  I know, I know--the joys of Paraguayan history aside, what's in it for you?  One good reason to spend some time with the novel is that it offers up a convincing sense of place.  This is clear from the descriptions of the anonymous poor observed at railroad stops--the same people over and over again, all with "caras de tierra en sequía" ["faces of lands in drought"] (111)--as well as the reference to yerba mate as "esa planta antropófaga, que se alimenta de sudor y sangre humana" ["that man-eating plant, which feeds off human blood and sweat"] (130).  Another good reason is that it includes some remarkable vignettes--the scene where a husband and wife trying to escape from their slavery-like existence at a mate plantation only to be ultimately confronted by a venomous snake darting through the air was worthy of prime Quiroga.  And while certainly conventional compared to Yo el Supremo, Hijo de hombre does sport a cameo or two from Halley's Comet and, "como en una gran pesadilla" ["as in a horrible nightmare"] (219), the best, most visionary scene involving dancing lepers I've ever encountered.  In other words, a Paraguayan Book of Ezekiel composed in Spanish and Guarani and published in exile in neighboring Argentina. 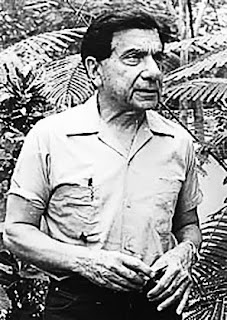