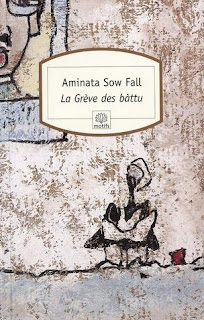 Recipient of a coveted Michelin star on Amateur Reader's 2008 Senegalese reading list--food for thought that's still dang handy after all these years--Aminata Sow Fall's 1979 La Grève des bàttu ou Les Déchets humains [The Beggars' Strike, or, The Dregs of Society] has singlehandedly doubled my exposure to Senegalese novels dedicated to workers' strikes.  In this case, the strike at the center of the action takes place when the diligent but increasingly guilt-ridden Kéba Dabo is tasked by his amoral boss Mour Ndiaye with ridding their unnamed Ville [City] of the beggars that are plaguing its streets.  The goal?  To permit the movers and shakers of post-independence Senegal to profit off the country's nascent tourism industry free from the visual vexations of poverty.  The only problem with this panhandler removal plan is that Kéba Dabo does such a good job of removing the unsightly beggars from their usual haunts that the "encombrements humains" ["human traffic jams"] (11) decide to go on strike outside the city to protest their mistreatment at the hands of the authorities--an irony which eventually causes Mour Ndiaye an embarrassing conflict of interest since the would-be Vice President needs the beggars to return to the city for just a few hours one day so he can treat them to a charitable feast mandated by the marabout he relies upon for spiritual guidance!  While far from the most exciting novel I've ever read, the leisurely La Grève des bàttu actually does a pretty decent job at blending realism and satire, social commentary and comedy.  I liked for, example, the edgy scene in which the abject beggars, previously described as being the bearers of "têtes moutonneuses" ["fleecy heads"] and limbs disfigured by leprosy and scabies (25), pontificate on how it's self interest and not compassion that drives the charity of the well to do; giving alms to the poor is a way to ward off "sorciers anthropophages" ["cannibalistic witch doctors"] and bad luck rather than a means to eliminate hunger among the indigent (72).  On a related note, I also liked the just slightly less edgy scene in which one beggar jokes with a counterpart that the latter's blindness is no excuse for not practicing a trade:  "Mais, ton métier, tu l'exerces !  Tu es mendiant !" ["But you have a profession!  You're a beggar!"] (110). 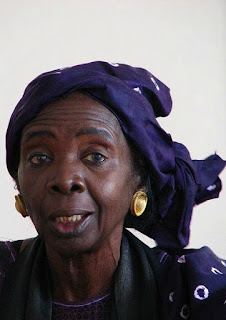