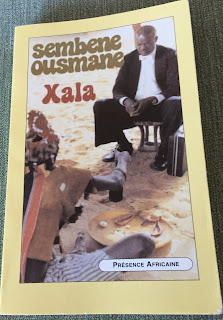 On the eve of his third marriage, the status-conscious El Hadji Abdou Kader Bèye would seem to have it all going on as far as 50-something Senegalese polygamists are concerned: a prestigious seat on the country's first African-led Chamber of Commerce, a chauffeur-driven Mercedes, a villa for each of his three lovely ladies.  Then, unable to perform on his wedding night despite having coveted the teenage N'Goné's body something fierce, things quickly fall apart for the beleaguered El Hadji as he realizes that somebody in his entourage has cursed him with the impotence-inducing affliction the xala.  While something of a trifle compared to either 1956's Le docker noir or 1960's Les bouts de bois de Dieu, Xala is enjoyable enough on its own merits and sports the novelist's usual penchant for acutely observed social commentary.  An added bonus: beyond the skewering of its grasping protagonist, an easy mark in regard to his symbolic function as "la synthèse de deux cultures.  Formation bourgeoise européenne, éducation féodale africaine" ["the synthesis of two cultures: bourgeois European training, feudal African education"] (12), the novel's satire is much more slippery on the related matter of "africanité" vs. "modernité."  For example, a doctor who knows of El Hadji's resort to so-called holy men and witch doctors in addition to men of science for help overcoming his impotence refers to Africa as "le règne de l'irrationnel" ["the kingdom of the irrational"] (82).  El Hadji himself, despite his Evian-sipping ways and French-wannabe standard of living, finds that "l'atavisme ancestral du fétichisme" ["the ancestral atavism of fetishism"] is reborn in him after a visit to a seet-katt or seer (95).  Ditto the question of polygamy and what it means to be part of a time share arrangement with one's husband--although the complaint of Oumi N'Doye, El Hadji's second wife, cuts to the chase re: her disappointment with their sex life: "Il faut être jeune et bon cavalier pour monter deux juments à la fois" ["You need to be young and a good horseman to mount two mares at a time"] (100).  Sembène Ousmane turned Xala into a film in 1975; I'd be interested in seeing it if the opportunity ever arises. 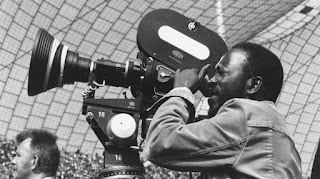