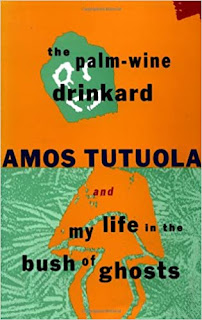 If I understand things correctly, Tutuola's wild The Palm-Wine Drinkard (full title and capitalization in my edition: The Palm-Wine Drinkard and his dead Palm-Wine Tapster in the Deads' Town) was one of the first books out of Africa to be a commercial and critical success in "the West" even though back home in Nigeria the novelist was derided for bringing shame upon the continent or some such on account of his imperfect and "uneducated" English.  "No prophet is accepted in his own country" & etc.  For our purposes, I'll note at the outset that I was pleased to make the acquaintance of this pre-independence Nigerian classic.  A freewheeling odyssey in which the affable narrator--a prodigious palm-wine drinker who occasionally appears to be a human but who claims to be both "a god and juju-man" and likes to refer to himself as "Father of gods who could do everything in this world" (194)--travels among the living and the dead in the company of his wife shapeshifting his way out of one scrape after another with Death, "a full-bodied gentleman" eventually reduced to a skull, a "very dangerous" bush in which "the boa constrictors were uncountable as sand" (222), and other amusing or monstrous oddities and locales supposedly imported from the world of Yoruba folk tales.  A+ for imagination!  As far as the actual writing is concerned, I'm not sure I understand the long ago fuss about its supposed flaws.  Although Tutuola's English is marked by a # of minor curiosities--i.e. his fondness for emphasizing certain words in sentences parenthetically--and repetitions, probably the "worst" mistake I noted was the following: "His both feet were very long and thick as a pillar of a house, but no shoes could size his feet in this world" (282).  Hardly a cause for concern, much less outrage, in a writer navigating a book in a second language, esp. one (book) in which the tradeoffs include scenes of Death tending his yam garden, a cosmovision in which people "and also spirits and curious creatures from various bushes and forests" (201) freely intermingle, and this stupendous intersection between the sensibilities of the olden days and the realities of modern air war: "I could not blame the lady for following the Skull as a complete gentleman to his house at all.  Because if I were a lady, no doubt I would follow him to wherever he would go, and still as I was a man I would jealous him more than that, because if this gentleman went to the battle field, surely, enemy would not kill him or capture him and if bombers saw him in a town which was to be bombed, they would not throw bombs on his presence, and if they did throw it, the bomb itself would not explode until this gentleman would leave that town, because of his beauty" (207).  On a related note, Tutuola's 1954 follow-up, My Life in the Bush of Ghosts, is said to be even more unhinged and poorly written than The Palm-Wine Drinkard although of course "poorly written" might not apply to anybody already accustomed to book bloggers' English.  I can't wait! 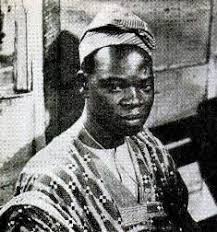