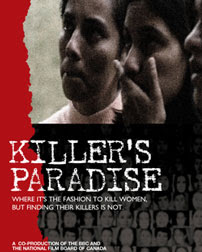 I don't know how easy it will be to find this outside of academic circles (my library copy came in an unmarked DVD holder with a homemade, bootleg-looking insert typed out in Spanish), but it's definitely worth tracking down if you get the chance. Apparently first aired on the BBC's This World program a few years back, Killer's Paradise (Spanish title: Paraíso de asesinos) has to do with the ongoing murder spree against women in Guatemala that claimed over two thousand lives in the five years before the movie was made--with an average of two a day in Guatemala City alone (10 times Britain's rate). Although male murder victims outnumbered female victims by a ratio of 8 to 1 at the time of the documentary's shooting, producer/director Portenier and journalist/narrator Olenka Frenkiel point out that the number of women murdered had quadrupled in just the last three years.

While these are grim statistics by anyone's standards, the filmed interviews with family members of the victims reveal the horror of the individual tragedies in a way that statistics alone simply can't. "It's the fashion here to murder women," laments the husband of one victim resigned to the knowledge that his wife's killer will never be caught. "There's no safety in this day and age." In another moment, the brother of a slain college student rails against the police for their blame the victim mentality towards girls and women: "That's how they see the victims. As nobodies. It shouldn't be like that." Fearing reprisals, the single mother of a recently-slain teenager asks a "favor" of the two police who come to make a token investigation of her daughter's death--not to investigate at all "because my other children are still alive, and so am I." Elsewhere, the father of yet another young innocent confronts the bloody clothes his daughter was wearing on the day she was kidnapped and shot and sobs, "Here in Guatemala, there is so much impunity."

Although a reporter's voiceover wearily notes that "gangs, domestic violence, and drug wars are all blamed" for many of the brutal, unsolved murders, Killer's Paradise lays out a convincing case that the root causes of the femicide are more complicated than that. Woefully inefficient police, the unleashing of ex-army "civilians" trained to torture people during Guatemala's 36-year civil war, and a macho culture that permits rapists to avoid punishment if they marry their victims all play a contributing role to the cycle of unpunished violence. To add insult to injury, government officials' response to the killing spree has been one of almost complete indifference: a point shockingly brought home when Guatemala's gutless president Oscar Berger tells journalist Frenkiel that she should be "more optimistic" about the soaring murder rates and the lack of progress in holding anybody responsible for the savage killings. This isn't an easy piece of work to watch--and you might never want to visit Guatemala again after seeing it--but I can't recommend it strongly enough for its courage and its sense of moral outrage. A real eye-opener. (www.nfb.ca/webextension/killersparadise)